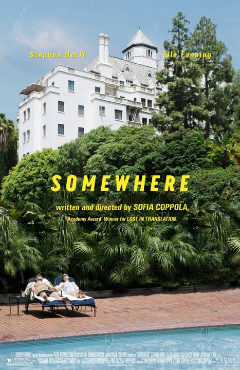 Somewhere tells the story of a worldwide Hollywood superstar named Johnny Marco (Dorff), who’s wasting away at the Chateau Marmont as he makes time for his next gig. He gets private lap-dances, gets people he doesn’t know to party with him, and lives in his routine.

One day, his daughter Cleo (Fanning) arrives, and his ex-wife tells him that he’s going to have to take care of her for a little while.

Sofia Coppola is a good filmmaker, and Somewhere isn’t a bad film. However, the film does suffer from this encapsulated world. It’s got some wonderful moments between Marco and his daughter — how big is Elle Fanning by now? — which seem to be the most honest and most relatable moments.

The film seems to tell us that yes, rich people who have it all feel lonely too, and that this loneliness is almost unbearable… which, in a time when we’re still in economic recovery and America struggles with debt, seems rather inappropriate. It’s hard to relate to that loneliness when there’s money worry, hunger, and the stress to find out whether you’re going to have a place to stay the next week. It’s just horrible timing.

However, I do see the beauty in a movie like Somewhere. It’s well-made, well-acted. Coppola’s visual style is ever-present in her films, and is a strong element in hew style of movie-making — just like Wes Anderson’s style shines through whatever film he’s making. But the story, from Coppola’s perspective, who’s always lived in her family’s bubble, is just hard to relate to and difficult to appreciate unless you are a Hollywood superstar, one of her peers — coming from a renowned family like hers. Art house lovers, who would probably gang up to watch slowly-paced films pondering about their own misery will probably be even marginalized from this tale. It’s probably one of the most common snarky comments you’ll see about some films like this: “Rich white people and their problems,” which in itself is a poor way to criticize the creative aspects of a film, but it applies for huge sector of an audience.

I’d like to see Sofia Coppola directing something she hasn’t written.