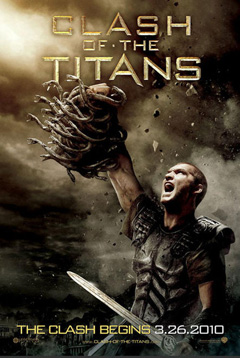 While I am writing this, all I kind of want to do is sigh. Sigh and sigh some more because I had great hopes for this movie and it all came crashing down as the little figurines that are supposed to represent humans over at Olympus. Excuse me as I sigh some more.

Clash of the Titans is the remake of the 80s film about the mortal son of the Zeus, embarking on a perilous journey to stop the underworld and its minions from spreading their evil to Earth as well as the heavens.

Sure, the CGI was average, sure the photography was also good, but why the f*ck do you mess with my Greek mythology Hollywood?! *shakes angry fist* What the f*ck do these so called Djinn have to do with the story? Where the heck does the Kraken come in to this story? Sure, the 1981 version is false as well, but heck, that one felt more real than this one ever did. I don’t know what it is, it could be Sam Worthingthon thinking he is Russel Crowe in Gladiator, it could be the somewhat rushed storyline, it could be the lacking action sequences. Whatever it was, it sucked.

The only thing that was good in this movie were the gods, Zeus played by Liam Neeson and Hades played by Ralph Fiennes, whom I did not recognize at that moment! His makeup was that good! But that was about it.

Sam Worthington, I am disappointed! Are you going to prove that you are a one-face actor?