Tom Hiddleston goes back to theather! He’s the main character ir William Shakespeare’s Coriolanus, with Mark Gatiss as Menenius, and will be directed by Josie Rourke. We will also get a Live broadcast on 30 January 2014~ 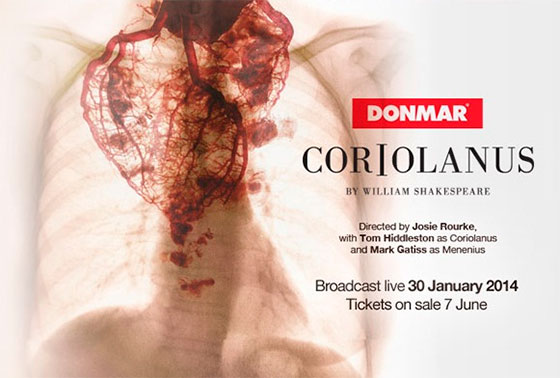 And this is what Hiddles has to say about that tragedy:

The fate of Coriolanus dramatizes the conflict in the heart of every public figure: the war between integrity and popularity. It’s a play about soldiers, politicians and the people. It’s a play for our time; for any time.

Talking about Hiddles, here are more pictures of Only Lovers Left Alive~

On the same page, Man of Steel has more pretty pictures for us as well as new character posters for Russell Crowe’s Jor-El, Michael Shannon’s General Zod, and of course Henry Cavill as Superman:

Batman: Arkham Origins‘ full trailer! It looks very good! And there’s also gameplay screenshots that include Joker! But, I don’t guys, this is supposed to be a prequel, but Batman ain’t looking that young. Of course I only see his mouth area but still!

On Marvel news, here’s some Young Avengers‘ conversation with Kieron Gillen. I like his reasoning behind the “Yamblr” introduction page:

I’m Internet native, but I went further into Tumblr when I was doing Journey Into Mystery. I came in when I became aware there was an active and living fanbase of the book. I lurked for a while, and ended up setting up a Tumblr and engaging a little. When I knew Young Avengers was happening, I could tell I’d have to go further. It just made sense.

Professional MTV fanboy Josh Horowitz shows the emails he traded with Star Trek Into Darkness co-writer and producer Damon Lindelof, about pressing questions that must be answered, like what about that Benedict Cumberbatch shirless scene, and why does Robocop’s daughter speak with a British accent?

Sadly, Star Trek Into Darkness has done as well as they hoped in the box office. It’s not a flop by any means, but yeah, it still underperformed.

So, remember how Star Wars: The Clone Wars was canceled? Well, we are getting another animated series! It’s called Star Wars Rebel and would serve as a bridge between the two existing trilogies. So yes, it happes between Star Wars Episode III: Revenge of the Sith and Star Wars Episode IV: A New Hope.

Star Wars Rebels takes place in a time where the Empire is securing its grip on the galaxy and hunting down the last of the Jedi Knights as a fledgling rebellion against the Empire is taking shape.

Here’s an interview with awesome Sophie Turner about the latest Game of Thrones episode where Sansa and Tyrion get married. Which none of them want. I like how she gets her character so well!

It basically means that she is kind of trapped in King’s Landing with absolutely no means of escape [laughs]. She’s denied her only route out. So she’s pretty stuck at the moment. It means she has more responsibilities, more duties. It’s never a good time for her.