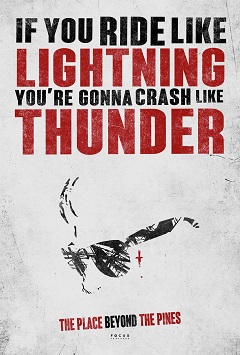 Disclaimer: I have yet to see Blue Valentine. I know, shame on me.

Anyways, Derek Cianfrance teams up with Ryan Gosling once again offering three stories for the price of one in The Place Beyond the Pines.

The first story begins through Luke Glanton (Gosling), a locally famous motorcycle stuntman — Hey Drive… how you doin’? (Glanton is definitely a lot more vocal than Driver, though) — who just found out that he had a son with his ex-lover Romina (Mendes). Despite Romina not wanting Luke to be part of her son’s life — she has moved on with another man (Ali) — Glanton starts robbing banks in order to support his own son.

The second story revolves around Officer Avery Cross (Cooper), who has just become a hero after solving a crime that almost ended his life. Cross is pretty much a honest man, which leads him into conflicts with how his workplace is corruptly managed.

The third story takes place 15-16 years later and follows AJ (Cohen) and Jason (DeHaan), two young boys who befriend each other in high school. However, their respective origins and personalities end up clashing, and let’s leave it at that.

The Place Beyond the Pines deals with fatherhood and fate through Glanton and Cross, two men of different lifestyles who eventually clash with each other and then we see the consecuences of their actions played out in the third story. I also have to say that the second story serves the purpose of developing Cross and works as an interlude for what’s to come later on. While the screenwriting for the film is pretty damn interesting (in a good way) and very ambitious, the execution of the film felt progressively overlong following the first story.

The cast isn’t to blame for the film’s ambitions: while Ryan Gosling shined strongly in the first story alongside Eva Mendes, and Bradley Cooper did the best he could with the post-Gosling parts of the film, the acting from Emory Cohen and Dane DeHaan wasn’t good enough for their own storylines, even if the final scenes made The Place Beyond the Pines as a whole come into full circle. If I have to mention other highlights from the film, those would be the score from Mike Patton and Ben Mendelsohn’s charming performance as Robin, who is used importantly to advance the storylines.

All in all, The Place Beyond the Pines is a very interesting film to watch — the first story is easily 4-star material thanks to Ryan Gosling’s charisma and acting talent alone. If the screenwriting was more polished and balanced for the other portions of the film, which reminded me of Django Unchained for all the wrong reasons, this would have been fantastic considering there was a good amount of things happening in all the stories.