There’s gonna be a comics-themed show at the pop art gallery/online store Mondo called “Mike Mitchell x Marvel x Mondo”. As the name suggests it features Mike Mitchell’s iconic portraits of Marvel characters and dammit why can I have pretty things like that? 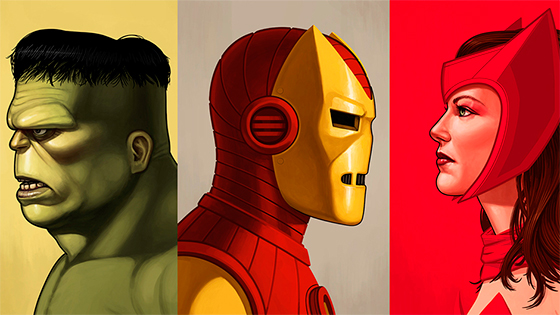 Also, here’s Justin Ishmael, Creative Director/CCO for Mondo, talking about the “weird reality” behind the portraits:

A lot of the times if you’re drawing Spider-Man swinging, you’re not really concerned about the stitching on the cowl and this and that. Because these are portraits, he had to get really intricate with all those things and just seeing how he thinks that Wolverine’s mask is sewn or how Green Goblin is actually wearing a mask and that’s where the Goblin face comes from and that he’s just sort of a real person underneath there and he shows how the mask attaches.

On more Marvel news, Joss Whedon talks with Empire Magazine about Avengers: Age Of Ultron, specially the titular character and how much fun he has with him~

I’m having a blast with Ultron. He’s not a creature of logic – he’s a robot who’s genuinely disturbed. We’re finding out what makes him menacing and at the same time endearing and funny and strange and unexpected, and everything a robot never is.

Kevin Feige also talked to Empire Magazine. A lot. He talks about Ant-Man and why he ain’t in Avengers: Age of Ultron (because Edgar Wright wanted to tell a different story and implies that Tony Stark can totally invent Ultron if he wants… dammit, Tony!) [1]; he talks about already having an actor to play Thanos and that he could care less about DC/Warner and their Batman vs. Superman movie (LOL, I love this guy!) [2]; he talks about the “Age of Miracles” and how that related to the non-mutant new origin of Scarlet With and Quicksilver, and doesn’t confirm (but hints!) about Paul Bettany playing Vision [3]; and finally about death being cheap in MCU as it is in Marvel comics, except for Frigga, poor gal is pretty dead because nobody is going to waste such a big funeral! [4]

Martin Freeman is an evil tease and talks about Mark Gatiss’ evil plans for a Sherlock one-off special, that probably ain’t gonna happen but fans will still obsess over.

Mark Gatiss may beat me up, but there is an idea for this one-off special that’s such a good idea, and as I was listening to it I thought ‘we’ve just got to do this’. And I don’t know when we are going to be able to do it, unfortunately.

Time Magazine has its list of “The 100 Most Influential People”, and hello there Benedict Cumberbatch! This is an excerpt of the nice things Colin Firth said about him~

It’s rare to the point of outlandish to find so many variables in one actor, including features which ought to be incompatible: vulnerability, a sense of danger, a clear intellect, honesty, courage — and a rather alarming energy.

Also on the list are Steve McQueen, who got a nice text by Lupita Nyong’o; and Alfonso Cuarón, who got his by J.J, Abrams~

So this happened, Toymaker Takara Tomy is making something that involves Transformers and Evangelion. And we get Optimus Prime in the colors of EVA Unit-01. And here’s part of the synopsis that basically points out that Transformers are going to kick some Angel ass!

With Neo-Tokyo 3 in their sights, the Angels slowly advance upon the city…but suddenly a spaceship comes hurtling down from the sky above the Angels: the Autobot Sky Lynx! Out of the ship emerges warriors of the far-off planet Cybertron. They’ve come to investigate after noticing an unusual energy reading. 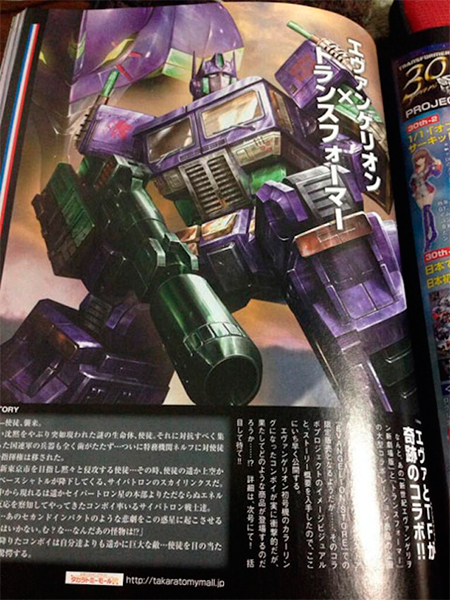 On more confusing news for Batman vs. Superman, Ray Fisher has been cast as Cyborg. Nothing against Fisher here, just wondering why they just don’t call it Justice League and be done with it? Come on, it’s obvious they want to do the movie already but want to emulate Marvel and make movies moving up to that… even they are pratically Justice League Light already! Also, the rumors of Jason Momoa getting cast as Aquaman have come back. Not that I mind Jason Momoa as Aquaman either. I wonder if they would dye his hair or would they be OK with his black tresses?

Finally… OMG! Monty Python final live show will be simulcast around the world! Please come to my country! Please! Come on! Doctor Who’s 50th Anniversary special was here! Last Night of the Pythons Live will be broadcast simultaneously on 20 July to 450 cinemas in the UK and 1,500 screens across the world. They were so kind to poor us, and I guess they saw they still had lots of fans since the tickets to their upcoming string of dates sold out in just one minute. Yep, pretty popular still!

Join the crowd live from London’s O2 in a final weepy, hilarious, uproarious, outrageous farewell to the five remaining Pythons as they head for The Old Jokes Home … on the big screen, in HD. 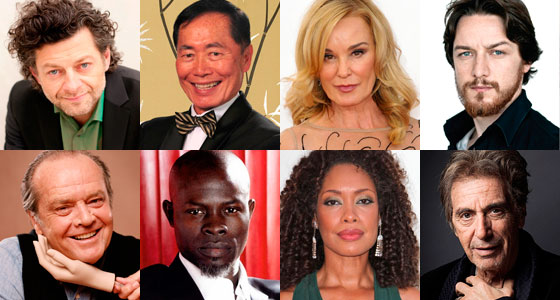