Greetings, my fellow geeks! This week we had news of a surprising yet kinda logical crossover that I hope is more than toys. But of course, with WonderCon and Kevin Feige still talking, there’s a lot of geeky news to check! t Let me show you:

Let’s start with an interview with Michael Hirst, the creator and sole writer of Vikings, about the last episode called “Blood Eagle” where there was a character dead through a quite violent Viking ritual that of course we couldn’t be shown in full because this is History and not an Eli Roth movie~ But most importantly, there was talk about Season 3!

I’ve written the first few episodes of Season 3 and we’ll start shooting on June 2 and it’s a huge, huge act for us, because we had thousands of extras last year and we’re gonna have thousands of extras next year and a lot of major characters. I’m pleased to be guiding this thing through, but it’s just getting bigger and bigger. So good knows what I have to do next year! But I do know that in Season 3, we attack Paris! And Jesus Christ that’ll be a huge thing!

And here’s Natalie Dormer talking about what’s next for poor Margaery, who keeps losing husbands~

Politically, it’s a disaster, to lose one husband is bad but to lose two husbands is careless! It’s really bad PR for Margaery. So regardless of what she thought of Joffrey as a human being, it’s not a good place for her to be in. So she’s like cursed or tainted goods […] You see that she’s been traumatized by watching Joffrey die. That goes back to my saying about her being a genuinely sincere, sensitive person. She’s just strong at hiding it. She’s lost her husband, and she’s lost the queenship in one fell swoop. So she has to start from scratch again, which is a tall order.

Obviously it inhabits the same universe, the same world, but it’s not the same people. I hope that after five minutes of watching our first episode, you won’t be thinking about the film any more. The general tone of the piece was right up my street, and I do think it’s its own thing. If it hadn’t have been called Fargo, I’d still have wanted to do it.

Oh yeah! Captain America: The Winter Soldier gets the first place at the box office for the third week! Not that there was a lot of competition (Sorry, Trascendence!) Also, The Amazing Spider-Man 2 is doing quite well with an box office of $47 million after openning in 14 offshore markets. Congrats!

20 minutes of Dawn Of The Planet Of The Apes were shown to a lucky few. There were six clips and they show up the human and ape side of things, as well as some interactions between the groups, some apparently more hopeful than others. 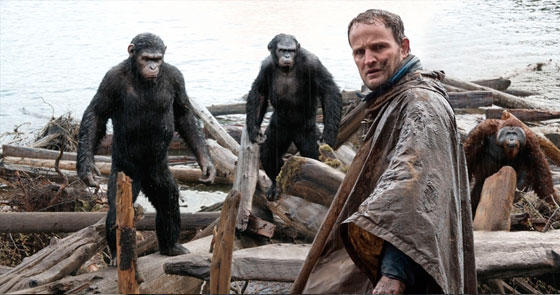 Another thing on WonderCon was the panel of X-Men: Days of Future Past, and apparently they consulted James Cameron about how to “handle time travel in the narrative”, because we all know James Cameron has a PhD in Time Travel!

It’s a much more grounded, gritty, realistic movie than the last couple movies. If I had to say, the tone of it would be somewhere on the spectrum between Spider-Man and Chronicle. The other movies were even further on the spectrum of being goofy and fun than Spider-Man.

In Your Eyes, written by Joss Whedon and directed by Brin Hill, was shown on the Tribeca Film Festival. And now we can watch it too! Justo go to Vimeo on Demand, pay $5 and there you go!