Director Dean DeBlois and star Jay Baruchel were at WonderCon talking about How To Train Your Dragon 2. Apparently DeBlois wanted to keep Cate Blanchett’s involvement a secret. Yeah, that would have been a better surprise. Damn those marketing bastards!

We had hoped that that was going to remain a secret until people saw the movie. I think Hiccup realizing that a part of him is missing is drawn from the first movie, this idea of his mother and ‘Where is she?’ We thought it’d be interesting if she was missing for 20 years, and in those 20 years she’s been living with dragons and learning their ways and discovering their secrets and becoming their fierce protector.

Also, here are the first five minutes of the movie where you can see some more of that “Dragon Quidditch” game they play. It’s actually called Dragon Racing, but whatever, Dragon Quidditch sounds much cooler. So yeah, SPOILERS!

Joe and Anthony Russo talked about their awesome Cap movie, and specially how it will link to Captain America 3, where we will get more Bucky!

We’ve had a lot of discussions with Markus and McFeely, as they would come up on set now and then. Everyone has a general sense of the direction we’re going with the next movie. The most we can say about it at this point is that Bucky’s story is not finished. This is an introduction to Bucky’s story. So if you want to guess at what this movie could be about… you could assume there would be a continuation of Bucky’s story.

OMG, this is the nerdiest coolest thing ever! A bunch of animator fans are redoing an entire episode of Sailor Moon in a variety of styles! Here’s a sample!

Finally let it be noted that young women, aged 17-33, are the fastest growing demographic as far as comicbooks are concerned. Yes, fangirls are here to stay, bros! You better deal!

Image titles like The Walking Dead, Saga, and Pretty Deadly have gotten their attention, but Wayne Wise reports that at Phantom of the Attic there are “a lot of young women who are really invested in Marvel and DC titles, as well as the Indies. New titles aimed at this group are an important part of this. Books like Captain Marvel, Ms. Marvel, and Young Avengers have been particularly successful.”

Roberto Orci and Alex Kurtzman break up! Who will get custody of their kids? As for now, Orci wants to keep Star Trek, since he is lobbying to direct Star Trek 3. Huh. I kinda do not want? I wish they will give it to someone who has some experience… and also loves Star Trek with all their heart for a change.

OMG, what? Star Wars: Episode VII could revert to the original May release dates instead of the mew December ones. You know what this means? We could get a Star Wars movie, Captain America 3 and Batman vs. Superman all in the same month in 2016. That’s terrible! … for my wallet. And it could also be terrible for all the movies involved since they would take money from each other! Go home, Disney! You are drunk!

Does any of you read, Doctor Who comics? Because Doctor Who: The Tenth Doctor will debut this July and will get a brand new companion! And she’s not from UK! She’s Gabriella Gonzalez, a Latina New Yorker! And inside the “timeline” (LOL!) of Doctor Who’s series, she should be a companion who comes after my queen Donna Noble~ Here’s a pic! 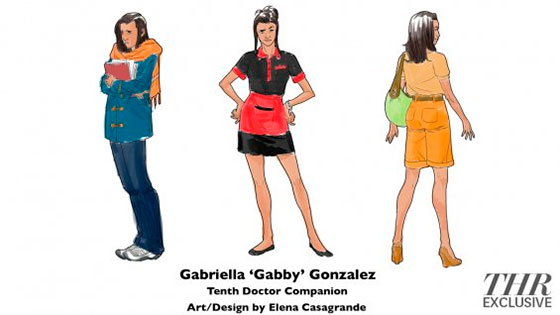 Steven Yeun (who we know as Glenn from The Walking Dead) and Felicia Day (who we know as Charlie from Supernatural) will be using their voices in the animated adaptation of comicbook Chew… Man, this must be one of the few times I actually wanted live-action instead of animation, but still yay! Here’s the synopsis for those who haven’t read the comic:

Chew centers on a detective who is a “cibopath,” a person who gets psychic impressions from whatever he eats, and is set in a world where bird meats are illegal after bird flu killed millions of Americans.