The trailer for Star Wars: The Last Jedi launched and, as expected, everyone is already dissecting it. Here’s Empire’s 10 Things We Learned From The New Star Wars Trailer, including the fact that now we know what Porgs sound like, and they also have competition in the cute creature department with those ice fox thingies.

Also from the trailer, 16 hi-res official images! Like this one of Kylo Ren quietly contemplating his helmet… before he smashed it into a wall in rage. Seems his temper tantrums ain’t a thing of the past!

And that’s a segway to the Real Reason why Kylo Ren wore that mask… besides him being a Darth Vader fanboy that is. And it’s a logical one!

Kylo Ren is the son of Han Solo and Leia Organa, protege of Luke Skywalker, and eventual master of the knights of Ren. He is known as the “Jedi Killer” among the rank and file of the First Order. His helmet was crafted to mask his visage and voice, concealing his identity as he delves further into the power of the dark side of the Force.

Here are some new Thor: Ragnarok pictures, where I am still on the fence on Loki’s new blue duds. Sorry, Loki dear, it looks like a discount bootleg version of your usual green and gold get-up. Also, will Marvel PLEASE stop giving wedge heel boots to their heroines?! I don’t care how badass Valkyrie is, those can’t be practical for a warrior! 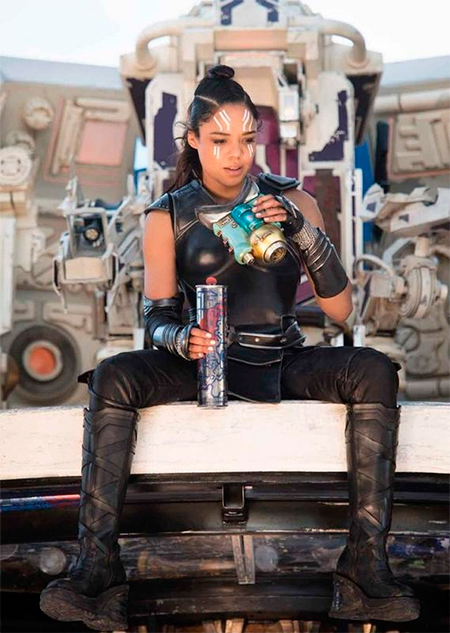 On sorta related news since Taika Waititi is the Thor: Ragnarok director, dude talked about the rumors of his potential job at helming Akira. Yep, it is true that he’s being considered and will “perhaps” direct it, since Akira is something he’s “very passionate about”. Taika wants to stick closer to the source manga than the original animated film in the live-action adaption. Also, no whitewashing would happen on his watch! Taika would pick “unfound, untapped Asian talent”. Well, if that’s how it is, and we cannot stop it from happening, then Taika has my blessing.

On sad news, Disney has shelved Gigantic, which was meant to be released in 2020. The story would have been a version of Jack and the Beanstalk, featuring a little girl giant. Next films to be released from Disney Animation are Wreck-It Ralph 2 in 2018 and Frozen 2 in 2019. Ed Catmull, Pixar President, had this to say:

It’s impossible to know when we begin a project how the creative process will unfold, and sometimes, no matter how much we love an idea or how much heart goes into it, we find that it just isn’t working. With Gigantic, we’ve come to that point, and although it’s a difficult decision, we are ending active development for now. We are focusing our energies on another project that has been in the works, which we’ll be sharing more about soon, now set for Thanksgiving 2020.

Here’s another clip from Thor: Ragnarok, which premiered during Chris Hemsworth’s interview on Jimmy Kimmel Live. The clip features a meeting between the God of Thunder and Korg, a fellow arena combatant voiced by Taika Waititi himself!

Another of those lucky bastards who already saw Thor: Ragnarok was James Gunn, who raved about it on his Facebook page. The whole thing is very enthusiastic, but this part really stood up for me:

I don’t think any film of the modern era has captured the batshit crazy fun of 80’s classics like Flash Gordon and Buckaroo Banzai as well as Taika Waititi has here. I felt like I was fourteen watching a magical VHS tape that exploded into something grand. It’s the most colorful of all Marvel films — I mean, Guardians of the Galaxy Vol. 2 is practically sepia-tone in comparison — and it’s also the funniest.

Star Wars: The Last Jedi director Rian Johnson spoke with Yahoo Entertainment where he talked about Star Wars themes, how no to spoil things, Rey’s personal journey, the worrisome cuteness of the Porgs and why Carrie Fisher is simply the best:

She was so conscious of the place that Leia had, not just broadly in the culture, but very specifically in terms of girls who grew up watching Star Wars when Leia was the only female hero on the screen. She really wanted to do right by that, drawing the character forward. That was something that she would always be pulling us back to.