Cast and crew will preview Vikings Season 4 at the San Diego Comic Con 2015 on July 10th. This season will be the last and final time Ragnar and Rollo will clash… ’cause Ragnar dies! Or at least should. Because History! And I mean the academic discipline, not the cable TV channel~

Taking about SDCC, Star Wars: The Force Awakens has totally confirmed a Hall H panel also on July 10th! Lucasfilm president and producer Kathleen Kennedy, director J.J. Abrams, writer Lawrence Kasdan, and “special guests” will be at the panel, and those lucky to be there will get a “special look” at the film.

Marvel also confirmed… that it won’t have a Hall H Panel at SDCC this year. It doesn’t really need it because Ant-Man will be about to premiere anyway by then, as the report said, “with so many hit franchises in working order, Marvel’s Kevin Feige just doesn’t have anything new to show this year”. It still makes me sad though! On the other hand, Warner Bros. will turn up in full force to promote their cinematic universe, specially Batman v Superman: Dawn Of Justice and Suicide Squad.

Speaking of which, here’s some cool new Batman V Superman: Dawn of Justice promo images! The images of the heroes themselves aren’t new, but the graffiti over it is great AND (possibly) telling of what the citizens of each hero’s respective city feel about them. Bats sure is more popular than Supes! 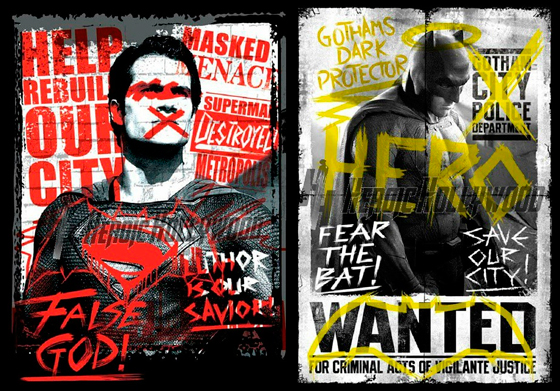 Ron Perlman is using social media to push for Hellboy III to close the trilogy. I truly hope he manages it!

Anybody out there wanna see #HellboyIII as much as I do? Let’s get this muthafucka trending, y’all! Let’s end the trilogy; we earned it!

Chris Hemsworth has been cast in Ghostbusters… as a receptionist! Apparently the script needed some tweaking before Chris was comfortable to be the “Janine Melnitz” of the new female team. The part was too small yo! Homeboy has gone a long way from the glorified cameo he did at Star Trek as James T. Kirk’s dad~

Bryce Dallas Howard also wants to ride the superhero train. Possibly as Captain Marvel. She was quite interested when an interviewer suggested the role to her. She’s not one of my favourites for the job, but I can’t help but like her for her enthusiasm~

Oh my God, will you write that? Will you write that please? Yes, let’s start a campaign now. That would be rad. Those movies are so fantastic, because talk about just these incredibly drawn characters! That’s the joy of the comics, is that you fall in love with these characters and it’s who they are that carries you from journey to journey to journey… it’s not just about set pieces. It’s really about who these people are, and so, yes, I just would love to be in a Marvel film.

But girl seems to have forgotten she was in Spider-Man 3, that or she doesn’t know Spider-Man is a Marvel character… Or maybe she just wants to be part of the MCU~

Here we have David Duchovny and Gillian Anderson back as Mulder and Scully for the X-Files revival! Yup, they were doing a scene in the Vancouver set. Also, Gillian has been tweeting set photos!