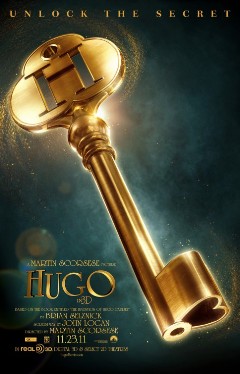 Admit it: if you saw the trailer for Hugo [1], you would have never guessed that Martin Scorsese was the director. The man behind Raging Bull, Goodfellas, and currently serving as one of the producers for HBO’s Boardwalk Empire, working on a 3-D family-friendly film? Unbelievable! However, Hugo turned out to be a charming film that is deserving of its Academy Award nominations.

Based on Brian Selznick’s The Invention of Hugo Cabret, Scorsese’s film takes place in 1930s Paris and follows Hugo Cabret (Butterfiled), a young orphan who struggles through poverty and hunger as he keeps the clocks working on a major train station. At the same time, Hugo avoids getting caught by the inspector (Cohen), who enjoys packing runaway kids off to the orphanage.

Hugo also faces trouble when he encounters an old man (Kingsley), who runs a toy shop in the station and accuses Hugo of theft. However, Hugo ends up befriending his goddaughter, Isabelle (Moretz). Hugo’s friendship with Isabelle enables him to solve a mystery by fixing an automaton, which leads to a very surprising revelation.

I could say more, but I won’t. Because Hugo is something you have to see for yourself to completely appreciate. It has all the tools that great films boast, such as great acting, solid storytelling, character development, good pacing, beautiful visual effects and more. Hugo is also not totally family-friendly. Through  Hugo and Isabelle — wonderfully performed by Butterfield and Moretz, respectively — it also explores death and loss. The rest of the cast is pretty strong — yes, even Sacha Baron Cohen is fine here. Ben Kingsley’s performance during the final minutes is superb. It’s a shame he hasn’t been considered for award recognition.

As far as Hugo‘s use of 3D goes, it’s not really as groundbreaking as say, Avatar. However, Scorsese works the 3D format in a way that makes Hugo‘s imagery look elegant.  The amazing camerawork is some of the best I’ve seen in film in 2011.

But Hugo‘s strongest aspect is, without a doubt, the love for classic films. In particular, the works of George Méliès [1], highlighted throughout the film. If Midnight in Paris reminded the world of how lovely literature can be, then Hugo pretty much does the same for classic films. While Scorsese’s admiration for Méliès feels genuine, it also creates one problem: the classic film lovefest, as glorious as it is, ends up overshadowing the film’s characters and takes away some of the interest in them. Despite that problem, it still doesn’t harm the film much because Hugo is still enjoyable to watch.

If you really love movies, do yourself a favor and watch Hugo on the big screen if you still can — it’s a great cinematic experience. Easily one of 2011’s best films.