The Fangirly Diary of a Geek Girl: Guess who’s back, back again

Greetings, my fellow geeks! This is week was slighly low on news, but it was important news for our bethren. Especially because we will have Whedon with Marvel for more time~

Let’s start with Hiddles, which is always a good way to start a week (yes, my week starts at Saturday)~ TotalFilm interviewed him on his HotList Award, where he, among other things, started to wax lyrical about Loki:

He is a combination of mercurial intellectual ability, emotional ambiguity, rakish charm, charisma and provocative wit.

Because nobody has Loki feels like Tom Hiddleston. He also talks vaguely about the Thor sequel and Jim Jarmusch’ Only Lovers Left Alive; and about his wishes for the future: comedy and western.

There were also two new pieces of promotional art for two movies I wanna watch… because I like senseless cinematic violence. 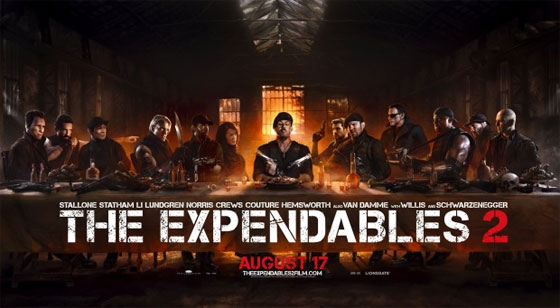 Yup, that’s a banner for The Expendables 2, which will join all those other pop culture representations of The Last Supper.

Then, there was the new Dredd poster, a movie I want to watch and not only because Judge Dredd with Stallone was a guilty pleasure of mine~

There was another interview that day, which was slightly less vague than Hiddleston’s. It was Bryan Singer talking about X-Men: First Class sequel, X-Men: Days of Future Past [1]. As we suspected, the movie won’t follow that story completely, because it will be less Fassbender as Magneto and that would be a shame.

The day was slow, and that put me in Doctor Who mode, especially after I found this compilation of all “New Who” episodes:

Thankfully my desperation of getting new Doctor Who episodes will get distracted by shocking news (for me): Entertainment One (The Walking Dead‘s distributor) has acquired the worldwide rights for a Black Jack television series. Yup, Manga no Kamisama Osamu Tezuka’s Black Jack will be a live action series. I’m scared yet kinda excited.

And then I found a Jeremy Renner interview where he talks about his resting face, the slow road to stardom, his relationship with ScarJo and dogs, and generally being a serious-faced  cutie! Yes, I like that pint-sized bastard.