The Fangirly Diary of a Geek Girl: Done in 60 seconds

First look at Brad Pitt in World War Z. And here’s the teaser poster and the website. Now, it’s too early to tell, but that does not look at all like the book. *sigh* Brad Pitt, did you buy a franchise to make yourself an action hero?

Yay! David Tennant guest starring in Star Wars: The Clone Wars this Saturday! In “A Test Of Strength“, David voices Huyang, a droid who helps young jedis to build their first lightsabers. He got the part because The Clone Wars‘ supervising director, Dave Filoni, is a fan of David’s Tenth Doctor.

Benedict Cumberbatch sure ain’t resting. Now my Posh Alien Prince may join Gemma Arterton in the Monty Python project Absolutely Anything. It would be nice to watch him in a comedy again~

Total Film gives us their casting suggestions for Star Wars, and while some are WTF for me, some of them have me nodding… I also like they put my Ginger Princes there~ Check it out!

Hey, we have lots of The Hobbit: An Unexpected Journey TV spots, banners and a cute featurette that kinda made my hungry~

We also have new Rise of The Guardians character posters and a clip.

Battlestar Galactica: Blood and Chrome is still delivering the goodies, and shows two minutes of a space battle to pump up the fans. Yep, it still looks bitching, even if the acting is not that great.

I also got two pictures of people with fantastic bodies. On one hand, there was Alexa Vega looking all grown-up and showing how nice Mother Nature was with her in Machete Kills. We also get Bobby Holland Hanton, known stunt double in Thor’s armor for Thor: The Dark World, which means, yay cosplaying details! 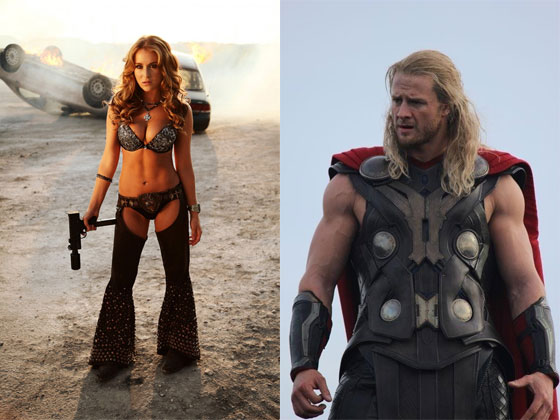 And we have a date for Spartacus’ season premiere (January 25th, 2013) and a trailer in all its bloody slow-mo glory! This will be the last season, and I am glad they are not milking and being as historically accurate as a TV series can be~