The Fangirly Diary of a Geek Girl: Done in 60 seconds

So, here’s the poster and trailer of Jurassic Park in 3D, which I only care to show because, OMG I’ll see Jurassic Park in a cinema again! I can believe it will be 20 years next year… I’m so old!

Toy Story 3 writer Michael Arndt might write Star Wars: Episode VII, and while some fans are dubious, I say hell to the yes!

Guillermo del Toro is discussing the Justice League Dark project and I really hope it comes true! It’s right up in his venue!

Star Wars: Episode VII has a writer but not a director, and while there has been fan suggestions everywhere, some of them have been discarded by the proposed directors themselves. So we have Zack Snyder, Quentin Tarantino and Steven Spielberg saying “No” in various levels of politeness (Damn, Tarantino was harsh!). Nicest ones may have been J.J.Abrams’ denial, and so far the only interested one (of the directors asked) is Jon Favreau [1].

So, Mark Walhberg is in Transformers 4. I totally blame the fans for this. Yeah, it was a fancasting idea first. They also revealed the new logo… at least it’s not Trans4mers!

But yay! More The Hobbit: An Unexpected Journey pictures! This time full of ugly mofos, including wargs and goblins!

X-Men: Days of Future Past starts shooting in April, and Brian Singer shows his excitement on Twitter.

So, Empire Magazine is doing their 2013 Jameson Empire Done In 60 Seconds short film competition, in which amateur film-makers had to condense their favourite movie into a 60-second clip. The results are sometimes funny, sometimes dramatic, but all-around awesome. And Tom Hiddleston agrees:

It’s quite thrilling when you see first time work, whether its a 60-second type film that’s an homage or a pastiche or something more. It could be hilarious and funny and stupid or it could be weighty and deep or somehow ethereal. I just think there’s room for everybody and I’m excited by seeing it… if you’ve literally got one minute to put your stamp on something, in a way, the constraint of it sharpens your instinct.

Hiddles, who is currently eyeing a theather return (let it be Broadway!), signed up as an ambassador for the project because he believes it’s important “to keep the doors open for new aspiring young talent”. And also because Empire Magazine loves him very, very much. Here are the pictures, which, while gorgeous, are a bit awkward~ 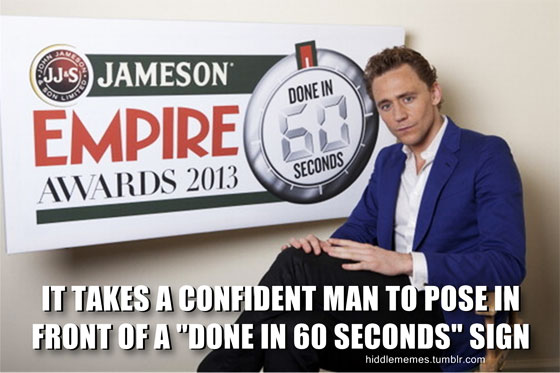 Finally, the origins of Benedict Cumberbatch’s name ’cause it’s fun! Also he and Martin Freeman signed up for a third series of Sherlock, even though we already knew they’d come back. My Posh Alien Prince will also be reunited with James McAvoy for the third time (they previously worked together on comedy Starter for 10 and drama Atonement) in the movie about WikiLeaks, where Benedict will play Julian Assange and James would play Daniel Domscheit-Berg, the guy who wrote the book the movie is based on.

And that’s it for the week! This Sunday I’ll say goodbye to the awesome series Avengers: Earth’s Mightiest Heroes. Goodbye, my sweet princes and princesses, it was great while it lasted. But I also say hello to Bravest Warriors, the new webseries by Pendleton Ward, the creators of Adventure Time: