The Fangirly Diary of a Geek Girl: Are you ready for this?

Third highest-grossing movie of all time Jurassic World‘s sequel (a.k.a. Jurassic Park franchise’s fifth movie) will be out in theaters for June 22, 2018. Also, Chris Pratt and Bryce Dallas Howard returning because duh!

Here’s the trailer of Avengers: Age of Ultron Blu-ray with 45 minutes of exclusive content that include info on the Infinity Stones, deleted scenes and, most importantly, a gag reel where poor Mark Ruffalo hits his head hard! Own it on October 2!

Do you remember when I wrote about the Torchwood radio play, Fall to Earth? We only knew that John Barrowman as Captain Jack Harkness was back, because if he wasn’t Doctor Who/Torchwood would revolt. And now there’s even better news. Ianto Jones is also back, baby! And of course, played by Gareth David-Lloyd! And he himself said that “it’s not ghost Ianto, it’s flesh Ianto”! Dude is quite happy to return to the role!

anto’s returned! Yeah it’s been great, and the fans are over the moon, which is great. They worked so long and hard to a) get Ianto back, and b) get Torchwood back as well, because it’s been in a bit of a limbo for the past few years. It’s brilliant to be back. I read the script, the words just flew off the page, and it was a real delight to do Ianto again.

Welp, I was unaware The CW’s Legends of Tomorrow was going to be an anthology series. Guess that’s en vogue now. But I don’t mind, so bring it on, executive producer Marc Guggenheim~

Each season is its own separate movie. What we want to do is have each separate movie have its own identity. So almost to the point where each season was telling one big story that you could sort of subtitle, like the way you do subtitle American Horror Story, if that makes sense.

Here’s the new season teaser trailer of my favourite DC TV show despite how horribly it’s written sometimes. Yep, Gotham Season 2 or “Rise of the Villains”. Oh yes! Get ready for September 21st!

And here’s another promo of a series I am not-so-patiently waiting to come back, The X-Files! And here have Mulder and Scully finally speak! Have you seen her hair, Mulder? Of course Scully is ready! She just didn’t want to upstage you~

Welp, I was forgot Heroes Reborn (which premieres on September 24) was getting a digital prequel! But hey, Heroes Reborn: Dark Matters is now available “exclusively” on the the new Heroes Reborn app. Here’s a synopsis:

It’s been five years since the public became aware of the existence of evolved humans or “EVOs” who possess incredible, supernatural abilities. In that time, the public has grown to either fear or revere EVOs. An online community forms around the rallying cry of the anonymous Hero_Truther, who seeks to humanize EVOs in the wake of lies, slander and fear mongering. Among those posting their personal stories is Phoebe Frady, who is encouraged to document her origin story by her brother, Quentin. But as Phoebe struggles to control her power, she attracts unwanted attention from a mysterious new company.

Gotham executive producers Bruno Heller and Danny Cannon talked about their more over-the-top villains we will see in the second season. Well, that will be interesting:

There is a genuine subtitle on the show, which is, “The Rise of the Villains.” It’s very much about the transition from old-school, mafia-type villainy to the kind of grandiose, grotesque, gothic evil that Gotham [City] is slowly moving towards. So, the crimes are grander. The villains are more grand-scale and theatrical. Monsters start to come out.

And finally, what started as fancasting, now has become Tyrese Gibson’s sorta serious interest to become Green Lantern. Dude has even met with Warner Bros. about it! I like his enthusiasm even if I am not too sure about his acting skills as John Stewart.

I’ve already had a couple of meetings at Warner Bros., so we’ll see what happens. I do believe that there needs to be more black superheroes out there, but that’s not even my motivation. I think I would be the best Green Lantern and based on my fans and supporters that spent around $6 billion in box office receipts, I feel like there’s a fanbase of fans out there waiting to see me put on this green suit and do my thing.

And that’s it for the week. Before I go, I want to wish Happy Birthday to Kristen Bell, Vin Diesel, Benedict Cumberbatch, Willem Dafoe, Woody Harrelson, Daniel Radcliffe, Rose Byrne and Anna Paquin. 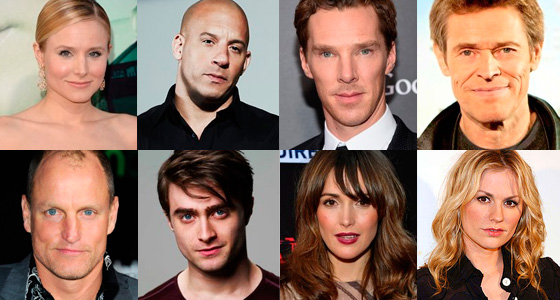