The weekend was a blur, but some of the most important stuff happened over the weekend, so let’s just lump it all together.

First, Kanye West debuted his latest single New Slaves, and you know what? I’m friggin excited! THIS is the Kanye I’ve been missing, the one that writes music that’s subversive, intelligent, angry, raw… honest. He hasn’t done so much of that since his College Dropout days. But I see a new leash on life here, either that or someone pushed the wrong button. What results is some hard music!

You’d be hard-pressed to find an officially official video. Why? Because he debuted the damn thing on a side of a building! Okay, I’m just done with you, Mr. West!

Idris Elba has dropped some new music [1]. Any and everything this man does is important to me, so yeah… it’s going up! And can I just say, I love the cover art for this album?! 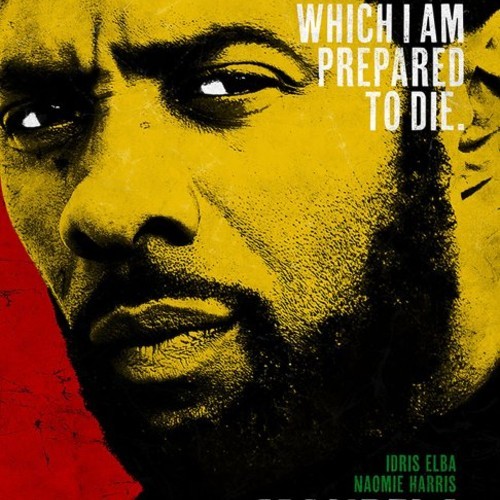 The coloring, the eyes… just… kill me now… PLEASU! I can’t take his perfection!

Sheila E graced us with her elegant presence and conducted an interview with the Huffington Post. She talked about Prince, performing, and just life in general [1]. Then soul songstress India Arie brought her new music back to the stage at The Living Room in New York City. Another artist I’ve missed like crazy. You Know I Got Soul went to the event and got some incredible photos [1]! Then some shocking news. George Michael was in a car accident over the weekend! Apparently he suffered a head injury, but his publicist ensured fans that he’s doing fine and only suffered some “superficial cuts.” You can read the full article here.

Paste Magazine was gracious enough to post videos of Kanye performing his new tracks New Slaves and Black Skinhead on SNL; however, the videos have been removed. I wonder why… But here’s the article if you’re interested in what Paste had to say on the event. The Rock n’ Role Hall Of Fame Induction Ceremony took place last night and let me tell you, it was emotional for everyone all round — including David Grohl, who had the honor of inducting Rush [1]. The entire concert event was spectacular. Public Enemy was inducted last night, as well as Quincy Jones, Lou Adler, Randy Newman, Heart, and  the late Donna Summer.

Then, of course, some news that made me squee like a silly fangirl, Janet Jackson is going back in the studio [1]! We’re gonna finally get some new music from the Pop Queen, the first in five years. I don’t know about ya’ll, but I’m beyond ecstatic about this.

And now the news I’m sure you’re all wondering about… Miguel flying? Yeah… well… let’s just say he got a wee bit overzealous at last night’s Billboard Awards and sort of… crash-landed into some fans… Just… just watch:

But then PRINCE came and saved the day! This pinnacle of musical perfection was honored with Billboard’s Icon award, and I don’t think there’s really anyone in the world who deserves it more. His performance with new backing band Third Eye Girl was fire! Everything you may have expected from the Paisley Emperor and so much MORE!

And that’ll do it for this week! And so how about some free stuff before I say goodbye? For all the old-school heads out there, Music Is My Sanctuary decided to give fans a free download to the fifth edition of their Forgotten Treasures series. You can download it here. Also, a video that was actually created last Sunday, but wasn’t brought to my attention til Monday, this short film compliments of Kahlil Joseph, based on the Flying Lotus title track Until The Quiet Comes. It was chosen as the Short Film Special Jury selection at Sundance [1]. Enjoy!