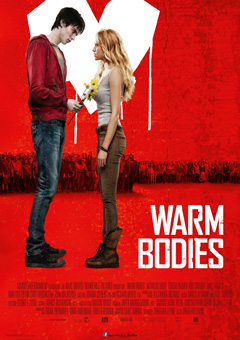 After the Twilight craze which I have largely avoided after reading 50 pages of the first book, I wasn’t interested in YA romance-horror adaptations until I heard some good things (from some very reliable sources) about the latest one- Warm Bodies also happens to star Nicholas Hoult (About a Boy and A Single Man alone should make you interested on this one) and Jonathan Levine was actually pretty darn good with 50/50.

I’m not very fond of horror, and zombies don’t really top my favorite evils. I generally find them boring, but I’m always game for a new spin. In here, we’re in post-apocalyptic zombie infection USA, where the last surviving humans are living separated by those infected divided by a humongous concrete wall. They’re all headed by Grigio (Malkovich), who sends Perry (Franco), his daughter Julie (Palmer), her friend Nora (Tipton) and others to a mission where Julie will meet zombie-infect R (Hoult), who falls in love at first zombie attack.

As humans and the undead [1] aren’t on the same side, their love- or, I guess, R’s attraction is forbidden. However, their interaction will trigger something that will put things in motion; things that the ferocious living-eating Bonies don’t like. It’s zombie Romeo & Juliet with a dash of extra cheese, so I guess it’s one of those movies where everything’s got to be silly. Warm Bodies turns out to be loads of fun… quiet fresh for about 40 minutes, until R reaches Julie’s quarters, specifically the scene after the balcony homage and Tipton’s Nora trying to be pop-culturally witty. After that point, Warm Bodies becomes a lot more formulaic and, you know- it comes with the genre: it’s predictable and less fun. However, the treatment and Levine’s direction elevates the material, and though the introspective zombie angle with the voice-over got a little boring after a while, it works. It was nice seeing the zombie perspective.

The Bonies get a little bit spooky, and how they transition from zombies to Bonies is interesting… but that’s as horror as it gets. I don’t know if they picked Palmer because she looks so much like Stewart at times — but with emotions, you know — it’s a bit unsettling. But she’s good, she even got the chance to shoot a few zombies, so she’s okay in my book.

Overall, silly fun. Warm Bodies is pretty good, and you get to see Hoult’s chiseled pretty face with some very nice close-ups.