Everyone right now knows that SNSD — okay, Girls’ Generation — performed on Letterman. To follow it up with an early showing of Live! with Kelly, I gotta admit, I was kinda curious about it. So I watched them both and realized something…

I haven’t watched, what Americans know as, Late Night Shows or Morning Shows in a long while. I used to do them a lot in Canada… maybe it’s a regional thing or something. But I don’t even bother to watch SNL when it’s on down here. I used to watch a LOT of trash then, like the random who-the-baby-daddy-gon-be they did on Maury, and I even caught an episode or two of Tyra.

ANYWAY — to cut a long story short, I used to LOVE the The Ellen DeGeneres Show, and her being goofy and all. I always thought she’d be perfect for some Asian music. There used to be a feature where you could send Ellen music, so I did — I sent her Crowd Lu’s Goodbye Hooks (再見勾勾) [MV], which has THE PERFECT silliest dance that she could do with her audience. But alas, that didn’t happen.

Returning to my topic at hand, watching SNSD perform on both occasions made me realize that Kpop is destined to morning television. I mean, I saw the Letterman performance [YouTube] and I could just picture older men liking it… having Letterman, Regis and Bill Murray there didn’t help the cause either. And some of the tweets of the night kinda confirmed that idea.

Julyssa knows that I know very little of the group… I don’t even know their names. Okay, maybe one, because that’s Julyssa’s favorite and she was on that episode of Family Outing. BUT THAT’S IT. So when I try to explain what exactly SNSD is I always try to say they’re a girl group of young women that are just really REALLY RIDICULOUSLY good-looking, kinda sexy but overall wholesome. I don’t know any of their scandals or secrets, but just based on what I see, these are girls you introduce to your family. 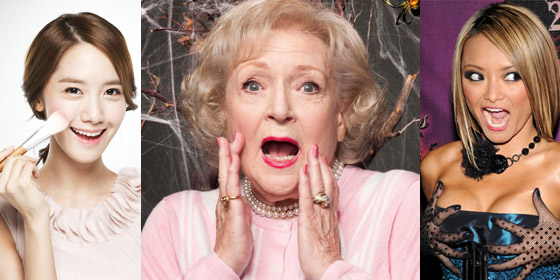 Because of this, you can’t introduce them to the acidic audience that watches Late Night Shows — me included. I just remembered, I do watch Late Night Shows, just not American ones. Any Graham Norton fans?

A Late Night Show audience is going to jump at you straight up with any wise-cracking joke they got — and they ALL use Twitter. The Morning Show audience is different… I don’t think any of them use Twitter, for instance, considering the amount of comments I found on Live! with Kelly, and I even think they might appreciate the kinda wholesome nature of SNSD in this over-sexualized market of pop music.

Plus, SNSD got to be a little bit funny.

So the girls would be perfect for a segment in The Ellen DeGeneres Show, and I don’t think Ellen would mind being taught how to dance by all of them. Okay, maybe Portia would be a little bit jealous xD

Also, I don’t want to talk (again) about what I think of Kpop that is not in Korean.