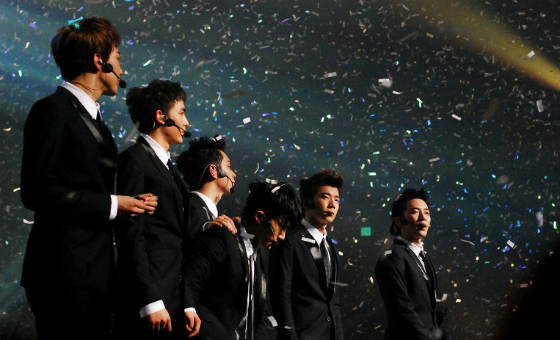 (photo, source unknown. If this is your photo please contact us)

Outside the Jamsil stadium it was warm. Inside it was Hot as 2PM kicked off their second Asia tour. They started off with a bang (for real, seems like 2PM love pyrotechnics) and kept the energy level high throughout the whole concert.

The crowd was going nuts, consisting mostly of young women and a whole lot of ahjummas — Korean for older ladies, it’s a form of slang. The screams were loud and high-pitched, so high-pitched that I was going deaf more from the screams than the actual volume in the concert hall – which wasn’t that high, but not too low either. It’s the first time I attended a concert with a decent amount of volume.

2PM are really great entertainers live. They indulge their crowd with funny antics, sexiness and a whole lot of love. Love because they know what their fans want and they give it to them. Love because they may be tired and overworked, but they appreciate every single moment they are on stage. Proof of that was seen when Taecyeon, towards the end of the concert, hurt his knee so bad that he couldn’t walk. Yet he refused to sit down or take it easy, he was determined to finish the concert to not disappoint his fans.

I have had the pleasure of seeing 2PM live once before, but this was the first full concert I attended. I haven’t been a fan of theirs for that long, but seeing them live just made me fall for them even more. They are charming, they know how to put together a good show and they work hard to create a great live performance. They sang great, they danced even better and they looked amazing doing so. For the small price I paid for the tickets, I got a whole lot of buck back. They didn’t disappoint and I will surely make sure to see them live again. They are worth the trouble.