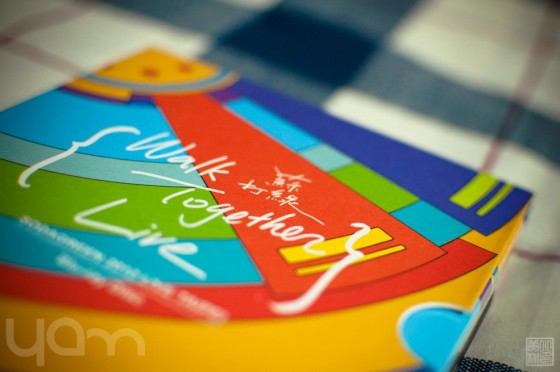 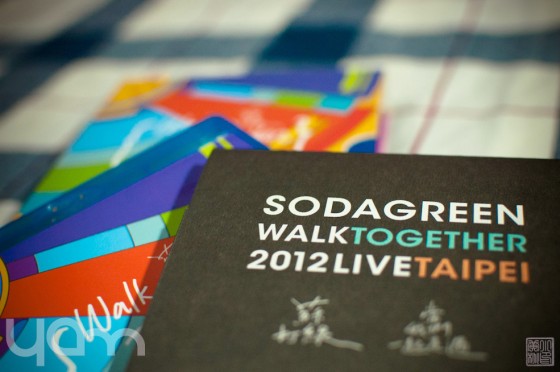 It’s been a long time since I got my hands onto something really pretty as this concert release by Sodagreen is, marking the band’s return to stage with a full line-up after guitarist A-Fu and keyboardist A-Kung’s return from the military with Walk Together Live to promote their 2011 album, What Is Troubling You, including this performance at the Taipei Arena.

Unlike Eason’s release for DUO, the production team for Walk Together mixed in part of the Making Of the event with the footage they got from the concert, leaving us with just barely 15min. of extras of the arrangements and the goofing around they did at the studio, to set a piece of nearly two hours of music from various Sodagreen albums of days past, songs by other artists that had been composed by lead singer Tsing-Fong in different arrangements, other covers, a couple of new songs, and a very special appearance by S.H.E member Ella Chen for the song she did with them for their last album.

The stage was fairly simple, avoiding 360 stages and instead focusing all on the front that was adorned with physical hexagons that were then projected onto with the concerts graphics that have been also enhanced for this concert release (footage both in color, black and white, and psychedelic flashing are included), and the giant screen projection at the back of the band. There’s a point in the show where the camera shakes and the projected hexagons start falling- it’s all pretty darn Universal Studios, even though you’re not constantly thinking that every frame of the show is perfection.

There is, inevitably, some noise in darker shots and planned-overexposure in some very glowing ones, but overall it all looks crisp. The 5.1 sound mix (either Dolby or DTS) seem about the same, but since the sound is coming from the front, that’s where most of the work is except when the audience pitches in with chorus, while Tsing-Fong’s voice is split on both channels and isolated in the center speaker.

The best element of this release, though, has got to be Sodagreen’s abilities to put on a show. The Taipei Arena isn’t exactly small and intimate, yet the band’s interaction — specially by the music break — was quite surprising. I’m not used to bands playing big venues being all nice and not super rock stars, yet, they made me feel like I was part of the gang- that closeness even through the TV screen; they really lived up to the Walk Together concept of their show. I really can’t imagine what being there and understanding moderate Mandarin would have been like. Lucky fans had the chance to request songs, and by the end of the show a large group was invited onto the stage for the big number.