Have Yourself A Merry Movie Marathon

I was originally intending to get this published in the newspaper I write for, but due to a big ad, I got bumped. I’m still really proud of it though, so here it is. Note: I wrote this while I was drinking and listening to Christmas music. I’m pretty sure you’ll be able to tell. 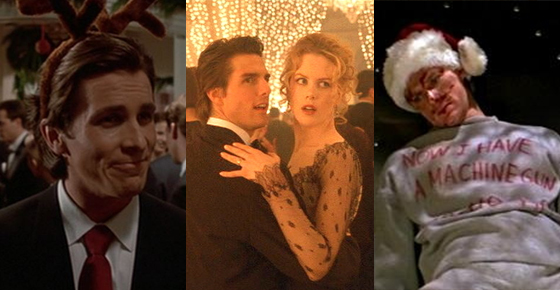 Jack Frost isn’t really nipping at anyone’s nose because it’s still eighty something degrees in Miami, but the holiday season is still the most wonderful time of the year — for watching movies that is.

With Oscar season hurrying down the chimney into theaters everywhere, there’s plenty to look forward to. You can have yourself a merry little Christmas with movies like Quentin Tarantino’s Django Unchained and Tom Hooper’s adaptation of Les Miserables, as they both release right on the 25th for your viewing pleasure. Be warned though, you may become a shoulder to cry on for your seat neighbor in the latter.

If you’ll be home for Christmas though, with that special someone when it’s cold outside or on a lonesome silent night, there are plenty of films to check out that will add to the holiday mood. Now, the upcoming recommendations don’t feature any claymation with a very shiny nose or thumpety thump thump’s, but instead are pretty non-traditional picks.

I could present you with something like Eyes Wide Shut, American Psycho, or Die Hard, some personal favorites that make for a winter wonderland of blood and sex, but that might be a big stretch. The truth is that the two best films to watch this holiday season are actually Richard Curtis’ Love Actually and Shane Black’s Kiss Kiss Bang Bang.

[Click on over to the next page to see why!]