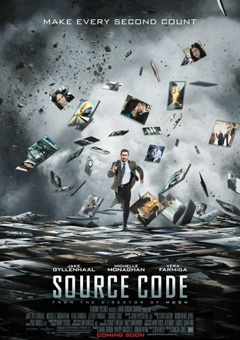 Warning: Knowing too much of what the Source Code is may ruin half the experience.

I can honestly say Source Code is one of the best films I’ve seen all year, but then again… I’ve only seen about 14 so far. But I can tell that it pulled off what The Adjustment Bureau tried to do mixing it with a little sci-fi mystery thrilling enough to hook us up and make us care about the characters, even if we were only meant to know some of them for just ten minutes of their lives.

The Source Code is a program that has been created to let someone — in this case, Colter Stevens (Gyllenhaal), an Army helicopter pilot — occupy the body of someone else for the last ten minutes of their lives, in order get details that might save lives in the future.

To avoid the possible impeding nuclear doom that might befall on the city of Chicago, they put Colter’s consciousness inside the body of a history teacher that was riding a train that was bombed earlier that day. Stuck in that mission which lets him revive those last ten minutes prior to the train’s explosion over an over again until he finds the clues to stop the destruction of the city.

Even though half the film is the same story over and over again, which gets to be a little irritating, Source Code is engaging from the get-go. It doesn’t matter if we’re only experiencing ten minutes of their lives, once we’re in, we start caring for Christina (Monaghan)… oh, yeah~ did I forget to mention? Source Code is also partly a love story — and it’s a good one at that. Each time Colter got to see her again, we learn something new about her, things are the same but slightly different, each time building the puzzle.

However, what’s even more moving in the film, besides Colter’s own backstory, it’s his relationship with his “virtual” guide Goodwin (Farmiga). She’s distant — kind of literally — but just like with Christina, each time we see her we get a sense of her… how she’s changing, even though we only see her from the chest up most of the time, and it ultimately leads us to the final bit of the story.

The ending works really well, despite all the neat loose ends. I kind of wished the film had ended in “that” explosion, but then I think it would be corny. I also liked that last nudge with how the Source Code really works, so…

Overall, Duncan Jones didn’t disappoint after Moon. He really made good use of the resources he had for the film, and he managed to put together a pretty great cast that worked really well together.