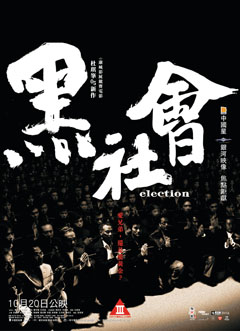 Ahh… the struggle for power. It’s always a mess, a worrying mess when it’s actually happening, but an entertaining mess when you’re watching it on screen. That’s what it is in Johnnie To’s Triads film, Election.

Established in the 1930s, the Wo Shing Wo elders are holding an election to pick their newest chairman, set to handle all of the group’s activities for two years when his term is up. The candidates? Brother Lam Lok (Yam) and Big D (Leung), who after some shuffling of their influences are neck and neck in the race, but due to Big D’s tempestuous character, Lam Lok is favored for the position.

However, before Lok can be properly named the new chairman, he must retrieve the Dragon Head Baton. All of a sudden, it’s a game of cat and mouse… or, I guess, a game of mouse against mouse, when brothers of the same society fight one another for the chance at power.

Johnnie To paints the dealings within the Triad societies partly as tradition, partly as brotherhood, in between dirt, struggles for trust… and even manages to add a little bit of comedy there — was I the only one who burst out laughing when Kun (Lam Ka-Tung) and Big Head (Lam Suet) are done  reciting what will happen to a brother who takes from another brother?

Simon Yam is cool and warm as Lam Lok, always maintaining a good head on his shoulder, and proves to be warm — or homey enough — to get you to trust him — until the very end of the film, of course. That’s in extremely stark contrast to Tony Leung Ka-Fai’s hot-headed Big D, playing him on a very VERY fine line of almost too campy. The rest of the cast of renown Hong Kong stars never seems too distracting, and the story moves dynamically enough to never mess with the pacing of the film, which goes by pretty fast.

The ending of Election, which gives way to Triad Election (or Election 2), leaves you with an unsettling feeling that’s hard to find in most movies. Generally, one would leave a show feeling like you’ve completed a fulfilling journey… or complaining about why you’re not feeling fulfilled. In this case, we’re left with a shocking scene juxtaposed with one of the most soothing closing themes — Song for Heaven (對天歌) [1] — we’re left with what’s happening, while wondering what’s to come.

For those who’ve seen Triad Election, they know what’s to come.

And yes, I would partly compare it with something like Ben Affleck’s The Town. ;P