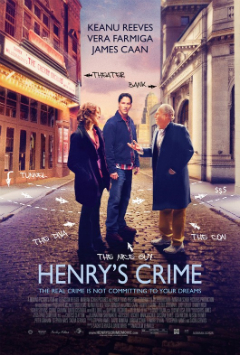 Henry’s Crime is about a man named Henry (Keanu Reeves) who goes to jail for a bank robbery that he was not involved in. After being released from jail, Henry decides that because he did the time, he will commit the crime. With the help of the recently released lifer, Max (James Caan), Henry sets out to rob the bank that he was accused of robbing before by performing in a play that is being hosted in the theater across from the bank.

I need to preface this review by telling you that I really and truly did not enjoy this film. Keanu Reeves’ acting caused psychologically triggered physical pain and it didn’t even begin to improve when his character had to pretend to be an actor.

However, with that being said, the rockier aspects of the film are softened by the wonderful performances of Vera Farmiga and James Caan. Despite the small size of their roles, they were lovable and relatable.

Henry’s character seems to have the makings of a potentially intriguing person; his wife divorces him while he is in jail and he peacefully obliges caring only about her happiness. He is an atypical, offbeat con-man but Reeves just doesn’t do him any justice. What I saw was a bland shell of what could have been.

The plot itself is clever and endearing; though, at times, a little fast. Many things happened within the first 10 or 15 minutes of the movie and I’m talking about a span of about 7 or 8 years. So, needless to say, I felt a little uncomfortable about the pacing.

Vera Farmiga plays the actress starring opposite Henry in Chekov’s “The Cherry Orchard”. A romance develops between the two and shrewdly parallels the romance in the play. Farmiga’s character, Julie, is dramatic both on and off of the stage. Her personality acts as a foil and complementary puzzle piece to Henry’s existence and ultimately changes him for the better.

I loved watching James Caan play the con-man advisor to the fledgling Henry. He was a solid and delightful character that kept things going when others seem to be distracted. I almost wish his character had a little more development on-screen.

Overall, I feel like this should have been a television movie. However, I would also like to say that my opinion appears to be in the extreme minority as much of what I’ve heard about the film is overwhelmingly positive (even in regards to Reeves’ acting if you can believe it). So I suppose you could just keep this in the back of your mind when deciding whether or not you’ll shell out the ticket money at your local indie theater. I feel like most people could hold out for the DVD release on this one.