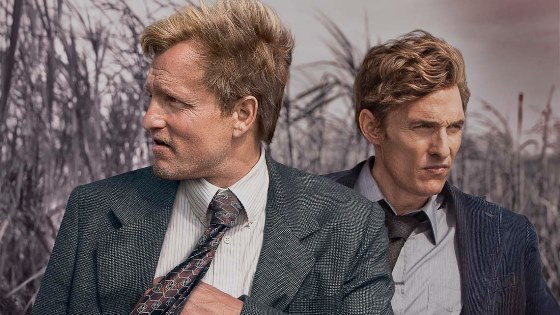 1995: Rustin “Rust” Cohle (McConaughey) and Marty Hart (Harrelson) are two police detectives investigating a ritualistic killing possibly connected to other disappearances and murders. 2012: Cohle and Hart, no longer with the police, are interviewed by Detectives Maynard Gilbough (Michael Potts) and Thomas Papania (Tory Kittles) about that investigation. What are the stories behind the questions asked and the answers given?

This eight-episode HBO series was written by Nic Pizzolatto and directed by Cary Joji Fukunaga (Sin Nombre, Jane Eyre). The high level of the production  is evident right from the gorgeous title sequence through the excellent performances, T. Bone Burnett musical direction, and long sweeping takes of Louisiana landscape. One could literally lose oneself in the eerie stretches of swamps and fields. Human-made structures are often deteriorated or as plain as “a faded memory of a town.” Rust Cohle also hallucinates motifs due to his synesthesia and previous drug use. Fukunaga and his camera crew pull off visual references like this Tarkovsky tribute along with an astounding long take at the climax of the fourth episode. Striking images become incorporated into the case and the themes of time passing, of people watching or ignoring what is all around them.

As the story unfolds, it turns out that True Detective offers a non-supernatural take on the negative outlook of cosmic horror, in which humanity and goodness are petty nothings in an uncaring universe. The show uncovers a network that would enable frightening cult activity in modern decades, transplanting Lovecraft’s conspiracies (like in “The Dunwich Horror” and “The Festival”) to the land of Southern Gothic. Names and themes are even borrowed from an older inspiration upon Lovecraft: the “Yellow King.”  Ambrose Bierce’s short story “An Inhabitant of Carcosa” began the “Yellow Mythos,” which is most defined by the first four tales in Robert Chambers’ short story collection The King in Yellow (which can be read for free here). According to Pizzolatto: [1]

The King In Yellow is in there because it’s a story about a story, one that drives people to madness. Everything in True Detective is composed of questionable narratives, inner and outer, from Cohle’s view that identity is just a story we tell ourselves, to the stories about manhood that Hart tells about himself, to the not always truthful story they tell the detectives investigating them. So it made sense – to me, at least — to allude to an external narrative that that is supposed to create insanity, or as I prefer, deranged enlightenment.

Given this subjective nature, I was surprised so many viewers take Cohle’s philosophical musings at complete face value, especially when Rust’s philosophical oddball demeanor also provides moments comedy. (The meme here is an example.) Some fans of horror author Thomas Ligotti argue that key Cohle quotes are lifted from Ligotti’s beyond-nihilistic nonfiction treatise The Conspiracy Against the Human Race. Others noticed that memorable dialogue from the finale comes from comic book series Top 10 [1] and Daredevil [2]. Pizzolatto has acknowledged in interviews that Ligotti, “weird fiction,” and pulp are strong influences on the series. True Detective engages and subverts common procedural mystery tropes as well. The triumphs of other film and TV detectives are only steps on the journey here. Despite the style and time-jumping structure, though, the show has its share of telegraphed stereotypes preventing it from becoming truly groundbreaking drama.

Through the hypocrisies of men like Marty and the reactions of women like his ex-wife Maggie (an underrated and underused Michelle Monaghan), the show tries to make statements about misogyny and the relegation of females to background vices and victims. However, the show rarely develops those females beyond background vices and victims. A Vulture critic decides to “give it credit for knowing what it’s trying to say, even if it doesn’t say it well and often seems to be glorifying the same things it’s criticizing.” Another reviewer is more critical in her findings: “The plot turns out to be a standard buddy-cops-catch-the-killer mystery…Every single woman, up to and including Marty’s pre-teen daughter, is primarily relevant to the plot in terms of the sexual things she does or the sexual violence that’s forced upon her…whenever the plot stalls, we’re magically whisked away to a strip club or a harlot’s boudoir, so as to revive our interest in the show through naked breasts.” True Detective’s comments on race are quieter; embedded in context and faintly surfacing, as the years progress, in the increased presence and authority of secondary and tertiary African-American characters like Gilbough and Papania. Even within the focus on Marty and Rust and their investigation, there are opportunities missed or wasted for writing other characters as people and not just plot devices.

At two points in True Detective, the tone of widespread corruption and injustice endures underneath a positive sheen of resolution. Characters learn to run with whatever victories they can manage, surviving with the regret of mistakes and blind spots. Who is caught and who has the power to escape? Both the heroes and villains are looking into the darkness, though they  differ on what they see in the stars. Yet Hart and Cohle do grow into better, humbler, if more fractured men who can drop their masks and communicate with each other.  Lines from Bierce’s story can shed meaning on the finale: “For there be divers sorts of death — some wherein the body remaineth; and in some it vanisheth quite away with the spirit…Sometimes, as is veritably attested, it dieth with the body, but after a season is raised up again in that place where the body did decay.” They bleed at the altar of the Yellow King and begin new lives.