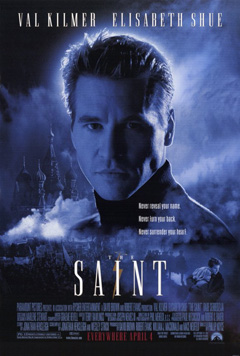 Director Phillip Noyce is known for his crime thriller films that sometimes mix action or romance. He would reach his peak with his most popular works The Quiet American and Rabbit-Proof Fence (not of the genre) released in 2002. But it was in 1999 when he did The Bone Collector and worked with Angelina Jolie, who would later kick a little bit of butt on Noyce’s Salt. With the advancement of technology (not only in CG, but wire work and camera technology), Salt is probably his most action-heavy movie to date.

My parents approved. And though my father is a little more lenient with his action flicks, my mother only approves of Matt Damon and Angelina Jolie for the action movies she’s seen in the past ten years.

The character Val Kilmer plays in The Saint is based on the 1928 character Simon Templar that ran until the 80s, which was turned into a radio series (once voiced by Vincent Price) and British television series (one with Roger Moore) — so, you know, kind of like James Bond. In here, Kilmer’s The Saint is a thief also known for wooing the women he’s going to steal from. In this case, Dr. Emma Russell (Shue), a young eccentric and brilliant scientist who’s made a breakthrough in cold fusion. In hopes of creating an energy monopoly, oil company owner Ivan Tretiak (Serbedzija) hires The Saint to steal the formula.

Though, in theory, sold as an action thriller, the action in The Saint is pretty lousy. I guess it’s because Simon Templar isn’t a trained killing machine, he’s an escapist, he goes POOF! instead of leaving his captors unconscious  I also don’t recall Val Kilmer being a good action star, not even as Batman. He’s good at talking, sure, but his character here is so calm that the thrilling parts of the film escape us. What really sells The Saint is his and Elisabeth Shue’s chemistry. Despite the hints of ditziness in Dr. Emma Russell — after all, how many young scientists that are about to make the discovery of their generation are into the abstract thinking of doodling artists? — Elisabeth Shue is effective. She’s the one being seduced, the one scared, outraged and hurt. She’s too forgiving with the man that duped her for her formula, but she’s in love!

Okay, so the dialogue and storyline are pretty bad, but that’s one of its endearing elements, no? Very much like making fun of Prince of Persia: Sands of Time, The Saint has its jewels with Russian baddie in his speech “Friends. Countrymen. Russians!” or Simon commenting on the baddie’s bad bed skills, or Emma’s quick “Take off your pants!” It’s all part of its charm. This is as close as you’re gonna get to Smut with some kind of a Plot.

Plus, small nudge for the Martin de Porres mention ;P