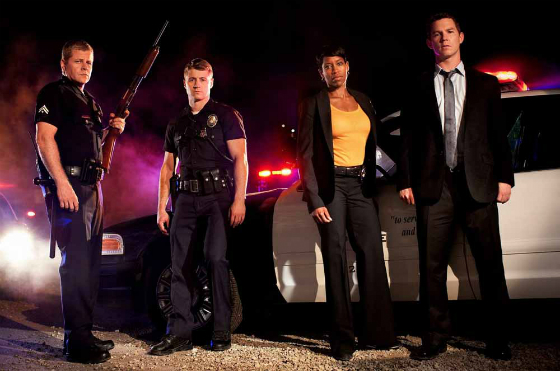 Police officers and detectives will risk their lives, but not their livelihood, for each other on TNT’s drama Southland. The fourth season continues the show’s tradition of escaping procedural tedium with rapid-fire (sometimes in a literal sense) cases that put emphasis on characters’ decisions. Outrageous situations, such as a crazy gun-toting cat lady or a running man on fire, are grounded with an in-the-moment documentary style. Much of the content is based on actual happenings, and the show is filmed on location (the actors are actually driving on the streets of L.A.!) with “former gang members and off-duty LAPD personnel to bolster the reality quotient.” [1]

However you see the stratigraphy of a show – with themes and parallels overlapping, underlying, or winding through – season 4 maintains an approach to storytelling that some would call “novelistic” for its dense nature. Dialogue is incredibly specific to character and circumstance. More general speech is usually saved for when characters try to convey abstract concepts, or when they’re accompanied by a film crew in the season’s sixth episode, for these are times when the average person tends to fall back on reliable phrases. Humor is also tied to character, which can make for reluctant chuckles at officers who delight in offensive jokes. “Never trust anything that bleeds for a week and doesn’t die,” for example. This precise quality is missed during parts of episodes seven through nine, which is disappointing, as it’s during those episodes when Southland ventures through murkier moral territory. Yet the weaker episodes do their job with great details to spare, within a solid season where even “Superbass” is put to good use.

Season 4 features the program’s most minimal main cast to date, zooming in on Detective Lydia Adams (Regina King) and officers John Cooper (Michael Cudlitz), Ben Sherman (Ben McKenzie), and Sammy Bryant (Shawn Hatosy). The über-competent Lydia, who has never taken a sick day, faces new challenges that even she might not be able to handle. Her storyline hits over the head with coincidentally similar investigations, but still provides gripping drama and a prime showcase for Regina King’s talents. Ben becomes instant buddies with new partner Sammy, while John Cooper now shares a police car with Jessica Tang (excellent guest star Lucy Liu). These relationships form and, to the heartbreak of many in the audience, rip apart when confronted with dilemmas that cross over from professional to personal.

A season that begins with the premiere “Wednesday” finds a fitting end with season finale “Thursday.” Muted nuances and echoes of previous seasons combine with the high pitch of point-at-the-screen, “did you see that?” moments that might prompt visceral reactions in a few viewers. Survivors and saviors aren’t always heroes in Southland, where likable — or at least understandable — characters plunge down distressing paths, forging identities out of scraps of integrity.