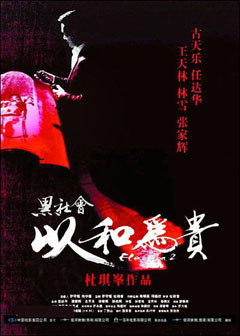 Triad Election is the follow-up film to Johnnie To’s 2005 film, Election, and it does rely on the viewer having watched the other film to bring the characters’ arcs full circle.

We all know power corrupts, so when Brother Lam Lok’s (Yam) two-year term as the Wo Shing Wo chairman is up — without chances of re-election — he begins shuffling his influences to bend the rules to his favor, even if it’s by using his Brothers.

In the meantime, the police forces are scrambling their pieces to try and maintain civil order because when the Triad societies are in an election campaign, things tend to get bloodier. So when the police captain (Yung) gets convinces business-loving Jimmy (Koo), who’s never shown much interest in becoming an influential piece of the Wo Shing Wo society beyond his own pocket, things start getting more complicated… and bloodier.

In this continuation, Johnnie To takes the elements of Election to twist and turn, leaving tradition on the side, and giving way to the dirty dealings of power corruption, when brother against brother go at it until the end, while also presenting a new angle for our characters — the would-be chairman, Jimmy, actually dreams of a life away from the Triads, just focusing on his business and getting enough money to support his family. Whereas Lam Lok’s interaction with his son is never actually fully explained, we do know some of the things his son has been witness to, which is far away from the image Jimmy has of his future child — he wants his kids to be doctors or lawyers, away from the life of crime he’s been involved in.

Interestingly enough, it is probably Jimmy who shows his worst (or best, you choose) face when it comes to protecting that dream. The results are bloody… almost unimaginable — okay, it’s horrible! But dogs freak me out as they are, so… — in the process, they break tradition. It begs the question: were all these deaths worth it? All these deaths to keep the power passing from father to son, instead of holding elections with its own bloodbath… which one would you prefer to keep civil order?

Similar to the ending in its predecessor, Triad Election doesn’t fully end on a positive note, but a quite bittersweet one. The corruption of power and money… they generally come together, yet in Jimmy’s case, he had to get one to keep the other.