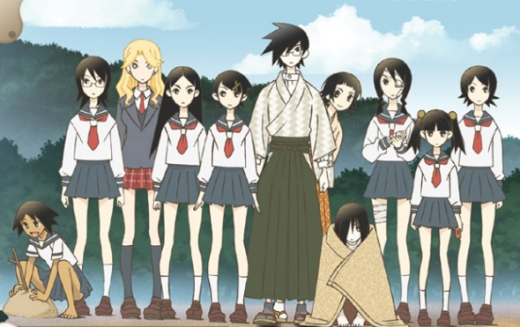 Sayonara Zetsubou-Sensei filters its intended audience with an opening scene of a suicide in progress. The lead character, teacher Nozomu Itoshiki, has hanged himself from a tree. One of his incoming students, Fuura Kafuka, runs into this startling sight in a cherry blossom grove. What happens next?

Itoshiki’s name, as the show takes time to illustrate, has kanji that can also be read as “despair.” Fuura Kafuka, on the other hand, is a relentlessly cheerful and positive young girl named after the author Franz Kafka. The extreme personalities of these and other characters ratchet up the antics in a rant anime that aims at everything from the anime industry to commonplace annoyances to an unnamed country north of South Korea. The show is definitely not for those with any violence triggers, as anything can be a target and some of the shocks stray far over the offensiveness line. (That poor dog…) Then again, this is a comedy show where a character describes attempted suicide as “making oneself taller.”

Jokes and references are flung rapid-fire, sometimes stuffed into lists in the background or within scribbling on Itoshiki’s chalkboard. Animation styles can shift just as fast, with everything from the signature lines of different animation studios to clay animation to Art Nouveau “bumper” segment dividers to even Mike Mignola’s Hellboy look in one episode’s ending theme. [1]

Although it doesn’t have the plot conclusion of the source manga, or even much of an overall plot, Sayonara Zetsubou-Sensei abounds with creativity. Never mind that many of the characters are traced straight from the pages of the manga — the show jumps from its source to form a creation all its own, with brilliance in its madcap plot escalation, violent tone shifts, and constant experimentation. Sayonara Zetsubou-Sensei is a masterpiece of absurdity, drawing out the bizarre from the everyday.