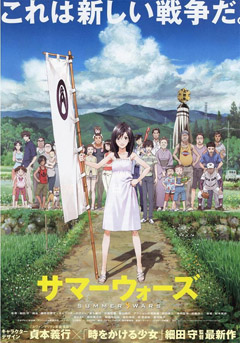 I was going to do a stand-alone review of this, but I thought it’d be the perfect start-up for the impromptu Japanese Cinema Blogathon organized by Cinema Fanatic and JapanCinema.

Summer Wars is an animated adventure by Mamoru Hosoda (The Girl Who Leapt Through Time), in which our heroine Natsuki, is heading home for her grandmother’s 90th birthday family gathering. Her grandmother is sick, so Natsuki believes that she will make her grandma happy by lying and telling her that she has a successful boyfriend.

The problem is that Natsuki doesn’t have a boyfriend, so she requires the help of Kenji, an awkward nerd that’s almost a math genius, and works as a code monkey of OZ — a virtual world that has millions of users and contains a lot of critical real-world information. Think of it as Facebook, but with battles and cute/cool avatars. Way cooler.

During the preparations for the party, Kenji receives a number-coded text message, which he solves opening up the privacy gates in OZ, and letting a vicious bug in.

Summer Wars is part techie-adventure, part family-dramedy. Coming from Japan, home of some of the finest quality animation, it’s got luscious art and flawless animation technique. The battle scenes inside OZ are probably the most amazing, as they stand out from what we’ve come to know as “anime” style.

The story is well built-up, creating a lot of tense situations, which anyone that spends most their time online are familiar with. The threat of everything being connected and having a weak point that can be used to make everything fall apart. It does fall apart, and everyone must come together in the time of need. This is the reason why I think Summer Wars is perfect for this — it is a very touching segment in the film, when everything seems lost, and every OZ user comes to Natsuki’s aid, giving “themselves” up to help this group of people battling the bug.

It’s a very powerful moment in the film… too bad Hanafuda games, even if fun, lack the tension required for such a big end of the world adventure. However, for more on Hanafuda and KoiKoi you can check The Japanese that the Japanese Don’t Know.