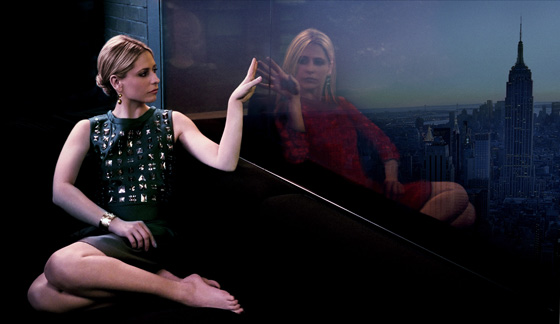 I have a complicated relationship with Ringer. I know that I said that I wouldn’t be watching many shows [1], but the first season is showing on Canal Studio Universal, and I don’t even need to bother to keep up with the latest in the U.S.

I love Sarah Michelle Gellar and I was thrilled to see her back on any screen, however, my relationship with The CW Network is a bit on shaky ground. Apparently, the new management wants the network to grow, or at least they don’t want to rely too much on the young women demographic because they want to be taken seriously.

Unlike so many of their other shows, Ringer follows Sarah Michelle Gellar — all grown and not in high school or university with typical girly girl problems — playing the dual role of stranded twins sisters, Bridget and Siobhan. After years of not communicating with each other due to Bridget’s drug addiction and other questionable life choices that doesn’t seem to fit poised Siobhan, Bridget is on the run from a very high profile trial against a very dangerous man. Bridget thinks she’s just meeting with sister Siobhan for a regular family get together, when all of a sudden Siobhan commits suicide.

Not knowing what to do and seeing a way out of her own problems, Bridget begins playing Siobhan. However, she did not see herself having to fix all the crappy mistakes Siobhan had committed in her supposed perfect life.

Here’s where relationship with Ringer gets complicated. The show’s got these really good elements of mystery and, dare I say, noir. However, they’re all muddled into this world of Siobhan-slept-with-who?! Siobhan-did-what?! In the end, Ringer feels like a telenovela for 75% of its running, then ends the episode with a shocking revelation that makes you gasp saying “Oh, no… you didn’t.”

I would be having loads of fun with that format if I knew for sure that I was only going to be this frustrated for a short period of time — mainly because, YES, Japanese programming has ruined me.

At the moment, there’s not many distinctions between Bridget and Siobhan except for the clothing, but as the episodes continue, Sarah seems to be finding little gestures to make them different. For instance, Bridget posing as Siobhan looks completely constipated all the time, considering she must be worried about getting caught. LOL While Siobhan’s voice never breaks, she’s always so sure and full of herself. That bitch.

There is little chance of The CW cancelling Ringer because it’s one of their best shows on air, or at least it’s different enough for the network to give it a go.  Hopefully, the script will let Sarah expand on both her characters because we all know what she’s able to do.