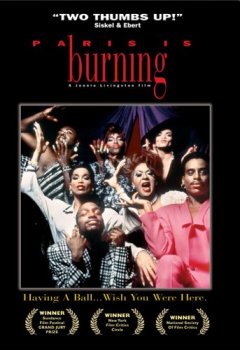 When approaching how to write this feature, I was really pushed to the limit of my thought process. I really didn’t know what the hell to write about. Quite frankly, one of the most epic documentaries I’ve ever seen. However, as it is the 20th anniversary of this breakthrough film, I’ll throw something out and see what sticks.

Set in the House scene of the New York ghettos in the 80s, Jennie Livingston chronicles the lives of some of the Black and Latino gay youth in NYC who’ve been turned out of their homes, ostracised by their communities, and left to fend for themselves. They learn how to survive, how to gain and express absolute self-confidence.  Of course, they gain this confidence from the annual Legendary “Paris is Burning” Ball that takes place in abandoned warehouses – going from run-down factories to glamorous fashion shows where participants are competing for the best costuming, make-up, hair, and yes, walk. You also have the gay b-boys…voguers who express themselves with strength and poise, their bodies twisting and turning, flipping and flying and battling the other band with their ferocious attitudes and their indescribable bravado.

But through all the fierce and fiya of the vogueing children of New York, you have the House Mothers – those venerable Divas of Decorum, those Trans-Females of Über-Femdom. These ladies ooze femininity and confidence, though the self-proclaimed Queen Mother of New York, Pepper LaBeija, is very confident in his manhood while still being unwavering in his sexuality. But it’s this self-proclamation of superiority that breeds some of the most amazing lines in any film, documentary or otherwise (“All of New York is wrapped up in Labeija.”).

And I suppose that’s what the focus of this blog has to be about: the brashness, the unabashed arrogance, and the unbelievable fabulousness of these young men who’ve been reborn into their respective Houses (all with the names of big time fashion lines and designers, or just bold statements of dominance): LaBeija, Pendavis, St. Laurent, L’Oreal, Extravaganza, and Ninja.

The cattiness of these heroic ladies knows no bounds; however, the strength of their conviction and the size of their hearts make them the true Queens of New York, each and every one of them. Firstly, Queen Mother, Dorian Corey – the veteran who’s seen the balls transition from flashy, Vegas affairs (complete with headdresses and sequins) to the Haute Couture of Paris (for which the balls are named). Pepper LaBeija, with her grace, elegance, and absolute dominance of the New York House scene would instantly make anyone bow down in respect. The lads and ladies of the House of Pendavis, the princesses of the House of St. Laurent, the unabashed beauties of the House of Extravaganza, and the fierce fighters and vogue extraordinaires of the House of Ninja all paint New York with style and class that gives glamour to the masses.

More important than just the attitude, it’s the comfort of knowing that there are people in the world just like you who want to express themselves without apology, who want to become the queens, kings, princesses, and knights that society told them they had no right becoming. Race, class, economic background, and most certainly, sexuality have barred these Legendary Children from fulfilling their destinies as true goddesses of their domains. Paris Is Burning highlights the incredible love for life that these beautiful people exude, as well as gives hope to everyone that they too can become legendary.