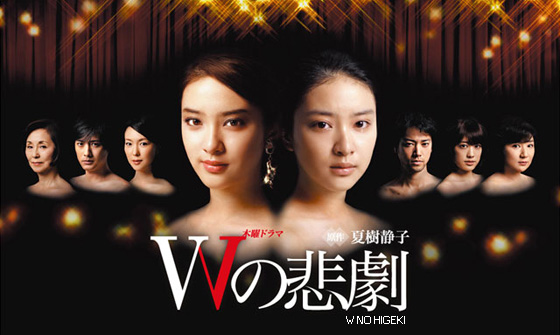 Adapted from the 1982 novel by Shizuko Natsuki, this is the third of its television drama adaptations, which includes a version released in 2001 and another one in 2010. This year’s adaptation stars Emi Takei in the dual role of Satsuki Kurasawa and Maho Watsuji.

Two characters with completely different names? W no Higeki — which literally translates to “the tragedy of W” — starts from the theory that in the world there’s two (or maybe even more) people that look exactly the same without being related. Fate makes it possible for these two people to never meet, for if they ever do, bad things will happen.

Satsuki (a rough un-kept version of Takei) works at a sketchy pub cleaning, to the bad luck of Ichijo-san (Yuki Matsushita) — a.k.a. Mama — who has been trying to convince Satsuki to take the stage now that her dancing star, Sayaka (Ayame Gouriki), is leaving them to become an idol. However, straight-faced Satsuki informs the whole team that she has no interest in dancing, and even if she did, she wouldn’t be able to because of the problem on her shoulder.

No, Satsuki has only one thing on her mind… to make money, lots of it. And what better way to make money than to sell her body? That’s exactly when she gets in trouble and ends up killing a john that didn’t want to pay her for her services. When the police, especially Detective Yumisaka (Kenta Kiritani), catches up with her, Satsuki gets a phone call from someone that can provide her with an alibi.

Satsuki Kurasawa and Maho Watsuji meet and notice their striking resemblance, setting the wheels in motion for getting away with murder… and some revenge.

That’s actually how it seemed for the first two episodes, which are the most interesting. The premise of meeting someone who looks like you that you’re not supposed to meet — as fantasy in tone as that is — makes for an intriguing start. The contrasting worlds of Satsuki, who grew up alone, always abused by the people around her, and Maho’s somewhat caring but overly oppressive family makes W no Higeki worth the introduction.

The acting is fine with lead Emi Takei doing a vast majority of the heavy lifting with mostly great ease, especially when she switches back to the darkness of Satsuki’s inner demons, but still doesn’t escape some cringe-worthy moments as Maho. However, the shift in the story from a mystery crime drama to a family revenge story is what knocks the interest down in the series a notch or two, with endless scenes of just talking about what to do with a body. It just… wants to go somewhere, but never leaves…

If you’re into sordid family dramas, then maybe you’re in for a treat. To me, this has just crossed the ridiculous line.