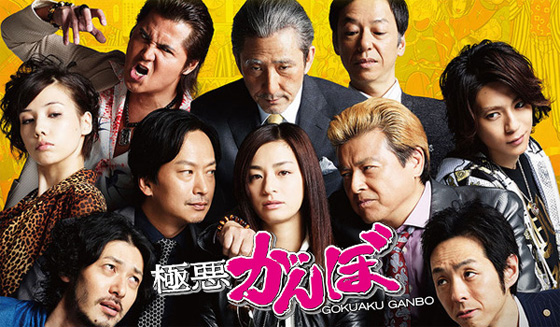 It’s seldom that you get to watch Japanese dramas as they’re airing in a legit way. Korean drama fans have been able to do it (and with more ease as time passes), but it’s always been a pain with Japanese shows. It seems times are a-changing, and I’m so happy it was with this FujiTV show starring one of my latest favorite biases [1] Machiko Ono and Odagiri Joe.

Based on the manga of the same name by Takashi Tajima and Takahiro Kochi, Gokuaku Ganbo (which refers to someone who is overtly violent or has a rough or “not gentle” behavior) follows a down-on-her-luck woman named Kaoru Kanzaki (Ono), who has been chased by debt issues and collectors since her childhood when her mother lost everything she owned. As an adult, Kanzaki gets in trouble when her good-for-nothing-except-cooking of a husband Kazuma (Shohei Miura) steals $20k off of the credit card of some bleached blonde dude named Kaneko (Tomokazu Miura), who turns out to be a member of Koshimizu Management Consultant… or a not-so-subtle debt collector.

When matters turn for the worse, Kanzaki decides to join Koshimizu to get out of her desperate situation only to dig a little bit deeper as she gets to know this crooked bunch who aren’t… all that bad.

There’s this particular flare to Japanese comedy (and oftentimes Korean) in that it can vary from extremely silly (continuous physical gags), wordplay (because the language lends itself for puns) to really twisted comedy that could push your buttons in the wrong way. There’s no better example of it than Nodame Cantabile, in which the sugary sweets of the protagonists’ polar opposites attraction is overlaid with the continuous humorous violent acts of them hitting each other in the most ridiculous ways. After some adjustments, I loved it. Gokuaku Ganbo doesn’t go to the same extents, but makes use of twisted laughs when Kanzaki is almost sent to an island for sexual favors in the first episode before she decides to settle for debt-collecting. Haha! See, prostitution and many other forms of crime! It’s funny!

Also! There’s been a gender-switch because Machiko Ono’s character in the manga is supposed to be a man.

At the core of the series, there’s Machiko Ono whose constant moments of emotional weakness make her the perfect “snail in the well” whenever she hits her target (or over-trusts her ex), she’s set back further, and you can’t help but wonder if she’l make it through. The underdog among a group of crooked underdogs in the beginning, but there’s growth showcased in the 5th episode when Kanzaki gets to bond with the giant crook with the soft spot Natsume (Riki Takeuchi). It’s almost moving.

The rest of supporting cast includes Kippei Shiina, Itsuji Itao, and Kaoru Kobayashi as the rest of the members of Kozhimizu Management Consultant and the boss, as well as Naka Riisa as the mama-san of the bar the guys frequent, Kankuro Kudo as the crooked lawyer who gets them off sticky situations, and Odagiri Joe as a crooked cop.

Gokuaku Ganbo is airing every Thursday night, with every new episode available 1hr after Japanese broadcast for Premium CrunchyRoll users, and one week later for the rest.

You can watch Gokuaku Ganbo in a variety of subtitles on CrunchyRoll.