Until Sbornia Do Us Part 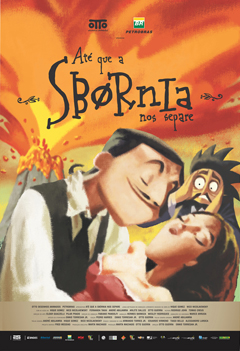 What happens when a small country isolated from the rest of the world by a mere wall of solidified lava gets sudden access to all the modernity from the big city?

That’s exactly what we see happening to the people living in Sbornia (which happens to mean ‘pissed drunk‘ in Italian, by the way), a small… appendix of the South American continent, united to Brazil only by a squiggly road that years ago had been blocked by a wall built by its older inhabitants. As a result, Sbornians have led relatively simple lives of licking the face of their properly dressed significant others, spitting on their spawns the result of that love, playing a violent football-like sport known as Axeball, and drinking the hallucinogen ‘national drink’ Bizuwin while calling each other ‘comrade.’

Two local musicians, Kraunus (Gomez) and Pletskaya (Nicolaiewsky), are caught in the middle of it all as one sees Kraunus’ wife is accepting of the liberties of the more ‘westernized’ sensibilities that are driving the Sbornia inhabitants to vote whether or not to lynch people, while the lovelorn Pletskaya falls madly deeply in love with the daughter of a hungry capitalist from the continent who sets out to commercialize Bizuwin as the next big thing.

Pushing animation and style to the extremes, leading the pack of a new era of animation in Brazil alongside Rio 2096: A Story of Love and Fury and the newly-released The Boy and The World, Until Sbornia Do Us Part enters the world of animation like a breath of fresh air with its satirical look at the age-old battle between capitalism and socialism, as well as the comical side of accepting modernity and falling in love at first sight, all packaged like a disaster movie with the aesthetic quirks and ironies of some of the most honest Sylvain Chomet. Add to that extracts of Gomez and Nicolaiewsky’s Tangos e Tragédias, and you got a trippy action dark comedy theatrical pop tango musical with a social commentary.

What more could you ask for, really? Though I did feel a certain emotional disconnect with the characters, most people I talk to believe that I’m much of a mush sentimentalist… and many other animator friends think style can sometimes trump emotions. I wanted to care for Peltskaya’s silly obsession with love, and I wanted to believe he and Cocliquot (Takai) really loved each other… but even in that situation, the scene before the silent film montage was brutal- literally one of my worst nightmares. The rest? It’s all to die for, of course. From the hilarious culture clash of spitting on your face in form of Sbornia a greeting, to the silly cat-and-mouse relationship between Peltskaya and Cocliquot’s mother, who hopes her daugther marries that gross moribund millionaire, to Kraunus failed attempts at explaining things in charade.

Here’s the subtitled trailer to get you an idea.