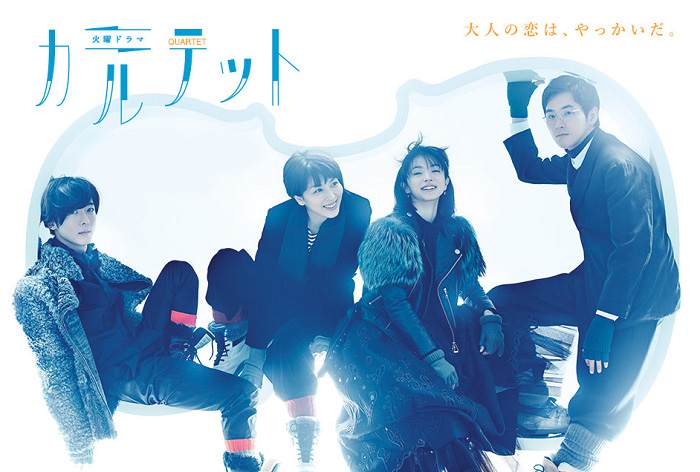 Isn’t it amazing to find a drama that surprises you with its twists and turns? You think you’ve got them all figure out to eventually hit you with something else entirely. That was my journey with Quartet, albeit, I had no idea what the show was about other than it being about classical musicians forming a quartet and Shiina Ringo’s theme song.

The first episode sets up the show like a mystery surrounding the disappearance of the husband of Maki-chan (Takako Matsu), comically named by destiny as Maki Maki, who had been living the simple life of a housewife until her husband went missing a year ago, and then she encountered the trio of musicians who will make her quartet full— the worrisome Beppu-san (Ryuhei Matsuda), the straightforward Iemori-san (Issei Takahashi) and the scattered-brain cello-player Suzume-chan (Hikari Mitsushima); revealing along their journey their stories, their weaknesses, and their ultimate unremarkable purpose in life: Make music that they enjoy.

You are the unnecessary byproduct created by the same process that brings great music into this world. Your music is like the smoke coming out of the chimney, it has no value or meaning. There’s no need for its existence. It’s not even memorable in the least. I couldn’t help but wonder; these people are like smoke, but why are they still doing it? They might as well quit right now. What meaning is there in continuing, knowing you’re just smoke? Do you truly think there’s value? Do you think there’s meaning? Do you think there’s a future? Why do you continue? Why won’t you quit?

Despite the secrecy surrounding each of the characters’ backstories, Quartet is ultimately a show about average people that are brought together to be the best possible people that they can be undeterred by their dark pasts and circumstances. Mediocre music-playing skills, terrible career prospects and all.

And Shiina Ringo’s penned song, Otona no Okite (おとなの掟, translated to The Adult Code), performed by the four actors as the fictitious Doughnuts Hole [Quartet], is the perfect companion piece:

Love, hate, want
If I could just blurt it out I wonder how it’d be
Ah, I dread making it black or white
..If only I could live sincerely..
That’s right, life is long, the world is wide
We that have found freedom are grey
Becoming happy, becoming unhappy
Only the inside of our confused hearts in panic
..Adult keep secrets..