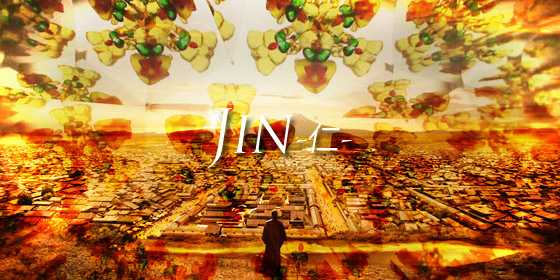 I’m taking the liberty of not tagging Jin as “sci-fi” mainly because there’s no machines or new technology involved.

Brain surgeon Minakata Jin (Takao Osawa) isn’t so sure about his skills as a surgeon after a failed attempt on a surgery he performed on his girlfriend Miki (Miki Nakatani), who was left on a comatose state ever since. During a bizarre operation, Dr. Jin extracts a fetus-shaped tumor from a patient that then causes some mayhem.

The concept after that is simple — Minakata Jin magically time-slips back to the Edo period, where he will be in the middle of very important historical changes.

Back in 1862, Jin is saved from a samurai attack by Kyotaro Tachibana (Keisuke Koide) who gets slashed on the forehead. In danger of dying and having his family lose everything, Jin operates on Kyotaro to the best of his abilities with the help of Kyotaro’s younger sister, Saki (Ayase Haruka). Being his only link to the period, Jin befriends the Tachibana family, and Saki begins her interest in modern medicine.

A show like Jin has a LOT of interesting prospects — the Butterfly Effect is at play when he begins interfering in all these people’s lives — what would happen if all the people that were supposed to die in a cholera epidemic didn’t die? Dr. Minakata Jin has a lot of understandably selfish reasons for wanting to advance medicine, the main one being so he could one day save Miki. Things get more exciting when we meet courtesan Nokaze (Miki Nakatani), who is an ancestor of the future Miki — the question is: would you let someone die in the present so that someone may live in the future?

Jin also serves for a fun Japanese history review. NHK’s 2010 Taiga drama Ryomaden presented us quite a chiseled Sakamoto Ryoma played by popular Masaharu Fukuyama. In here, Ryoma is played by Uchino Masaaki as a courtesan-sniffing loyal friend who loves to have fun. It’s completely hilarious, but at the same time makes him feel a little more real.

Of course, Jin doesn’t completely explain what is going on because it’s such an important period historically that it’s common knowledge for viewers. However, it’s all set up nicely for what’s to come in Jin 2, the second series aired in 2011, where the doctor will be involved with even more historical figures, possibly changing the world he used to live in.

The acting is pretty great, especially from Miki Nakatani as courtesan Nokaze. Outside of her wardrobe and makeup, her speech is amazing. The way she speaks and gestures, the way she holds herself high even though she has such a tragic background. She’s amazing. Ayase Haruka also holds her own — I much prefer her here than in Hotaru no Hikari.

Saki is a strange blemish at a time when samurais’ daughters were supposed to get married to higher-ranking families — Saki takes an interest in Dr. Minakata Jin… or maybe she takes an interest in medicine first, it’s unclear to me. The way she acts and holds herself reminds me of the conflicted feelings that Amy Adams gave Disney princesses in Enchanted.