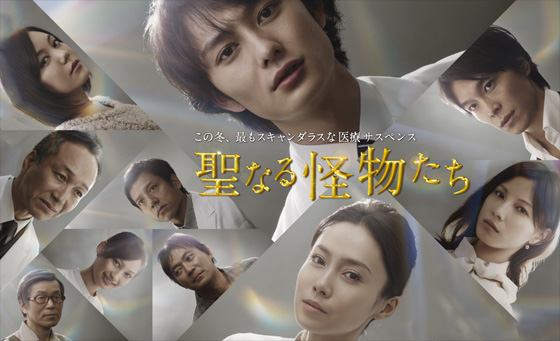 Seinaru Kaibutsutachi, or The Holy Monsters, is a Japanese drama airing on TV Asahi. It stars Masaki Okada as a young doctor named Kengo Shiba that gets transferred to a small hospital that has barely any budget to keep on going. In there, he meets super efficient nurse Yuka (Miki Nakatani), who seems to be more than meets the eye.

On the other side of town, Keiko (Ai Kato) is marrying Toshio (Hiroki Hasegawa) from the prominent Hyuga Family. However, during the reception, Keiko falls ill and the deep red of her blood stains her dress. Already at the hospital, Keiko is informed that her hemorrhage couldn’t be stopped, thus the doctor had to remove her uterus to save her life.

Crushed by this, Keiko is going through a rough time until all her efforts get focused on having her own baby, even if it means to steal one or get a surrogate mother — which is illegal in Japan (also see: Madonna Verde). For this Keiko needs the help of her older sister, Yuka.

I don’t know if this has anything to do with my perception of Japan, but deep in my subconscious I think that telenovelas don’t mix well with the culture. Whereas I’m used to kdramas being overly dramatic centering on relationships and the dirty business of human nature, I see jdramas as more introverted and more exploring — which would explain why I’m having a hard time with Seinaru Kaibutsutachi.

Then again, I’m generally not a big fan of Masaki Okada — he’s got a pretty face and is tall, but I really don’t see why he’s so popular. In all the dramas or films I’ve seen him in, I can probably point one or two where I didn’t hate him that much. He usually plays unlikable characters alright, but I really have a hard time buying him as a lead. As Kengo, he’s just boring. I don’t even hate him, he just bores me to death.

The star of the show is actually Miki Nakatani, which makes me even sadder for not liking it. She plays Yuka as a dual-natured person. She seems really efficient at first glance, but she’s really manipulative to the point of being a little bit scary. There’s a particular scene with Anne Suzuki that just gives me the creeps — which reminds me, in Seinaru Kaibutsutachi, all the women seem conniving or completely nuts. I’m sure all the characters’ true colors will eventually come out — this has all the makings of a telenovela — and you could see Toshio backstabbing Keiko to get together with Suzuki’s character from a mile away.

Motherhood can be such a messy business, especially when illegal things and power are involved. However, the pacing of this on-going show is a buzz killer.

I also disagree about their views on secrets, where Nakatani’s character states that “secrets and lies are a privilege of the powerful.” When in reality, I believe it’s their burden. Nobody cares about our secrets as much as everyone else cares for theirs.