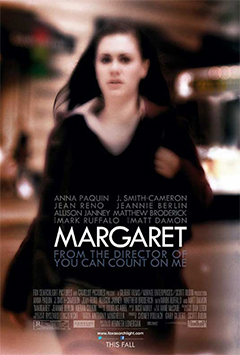 After years of hard work and perseverance, Kenneth Lonergan’s Margaret was released to a very limited audience. Those who wanted a fuller experience waited for the extended cut on DVD and for some people — like myself — it was, unfortunately, not a worthwhile wait.

Margaret follows Lisa (Paquin), a high school student who inadvertently causes a traffic accident that results in the death of a woman. Knowing that she is partially to blame, Lisa is overwhelmed by guilt. She begins lashing out at everyone around her, not caring whether it’s her friends or her mother. Embarking on a journey to set her wrongs right, Lisa finds that the world isn’t quite the place she imagined.

A certain amount of respect must be given to Lonergan for sticking to his ideas when so much was against him in making this film. It is impossible to deny he is a good director and writer, as seen in his first film You Can Count on Me, but Margaret is a very flawed movie. If its three-hour length seems daunting, it’s because it truly is, and an abundance of slo-mo walking scenes and music that often overwhelms any dialogue going on doesn’t do much to alleviate the sheer monotony of it. This does not mean that the entire movie is tedious, as there are some masterful scenes that pop up from time to time.

One such moment is the aforementioned traffic accident that occurs just under fifteen minutes into the film. In her extremely limited screen time, Allison Janney portrays all the fear and confusion that comes with being near death, and Lonergan’s camera work really instills a sense of urgency and desperation that the rest of the film lacks. Desperation comes into play again in a fight between Ruffalo’s bus driver and Lisa, in which Ruffalo reminds everyone just how impressive of an actor he truly is.

It is with the lead actress of the film and Lonergan’s writing for her that we encounter some major issues. A young post X-Men Anna Paquin has one of the most unbalanced performances caught on film in a long time. Many of Paquin’s sudden outbursts and reactions to situations — like one MUBI comment I read — approach the oddness levels of The Room, while others offer a depth to her character that actually shows some development rather than mindless yelling and anger. As if her dealings with guilt aren’t frustrating enough, Matthew Broderick shows up as her teacher to read aloud Hopkins’ poem Spring and Fall and drive home the point of the film about halfway through it.

The film’s greatest achievement lies in the relationship between Lisa and her mother. Their lives are contrasted beautifully, as one is a stage actress who tries hard to hide her real emotions while the other refuses to keep any emotions in, always presenting herself to others just as she is. Lisa’s volatile attitude toward her mother offers hard hits for those who have strained relationships with their parents and the way that Lonergan ties up their tale is truly beautiful.

While the last minutes of the film provide one of the most brilliant finales, I cannot say that it is well worth the slow paced three-hour film. Margaret has its masterful moments, but its ambitions to achieve a grand-scale, operatic tale of pure emotion fall flat.