Christopher and His Kind 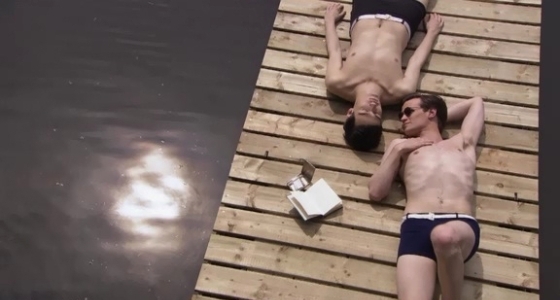 Christopher and His Kind is an adaptation of the autobiography of the same name written by Christopher Isherwood. The name may not be familiar to some, but this English-American novelist wrote the awesome book A Single Man, which was later turned into an awesome movie by Tom Ford and starred Colin Firth.

The film starts with Christopher writing his memoirs in LA in 1976. After that, the whole movie is practically a huge flashback to his days in the 1930s when he travels to Germany, leaving his mother and brother in England. At first, it’s all fine. He meets same-minded people, he has some affairs… but this is the story of a young gay man in the Germany of the 30s, ergo Nazis happen. Soon Christopher will learn that place is not safe for him and his kind.

To be completely sincere, besides my love for biopics and historical movies, what drew me to this story was Matt Smith as Christopher Isherwood. You see, I’ve only known Matt Smith for playing The Doctor for Doctor Who, where he is OK, even if my new series Doctor will always be David Tennant.

In Christopher and His Kind, Matt Smith was brilliant. He plays Isherwood as an upper-class renegade, who wants to enjoy his youth in certain decadence; and while he possesses a good heart, he’s too naïve and so remains a fence-sitter through the social and political changes in the Germany of that era. And, of course, there’s the gay sex, which is played quite tastefully if not exactly romantically. This is a young man escaping England’s morals and manners, after all.

Another performance worth noticing was Imogen Poots’, who plays aspiring actress and (not that good) singer Jean Ross. If you get Cabaret flashbacks it’s because she was the one who inspired Isherwood to create the character of Sally Bowles. Poots as Jean Ross is entertaining and pitiful for moments, and she is more aware of the changes around them and warns Christopher to “seize the moment”. Poots also sings a couple of songs in a club, and she is not that great at it, which is appropriate since Jean Ross wasn’t a great singer, just very charming.

In the end, it was the editing that did a disservice to the movie. The time constrictions of a TV film played against it and it felt a bit rushed and episodic for moments.

But all in all, Christopher and His Kind is a good movie that shows us an important moment in history for the LGBT community.