Gene Gant – The Thunder in his Head 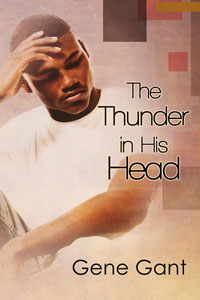 The hardest part about growing up is understanding your demons. It’s hard to find a place to feel safe in your own skin when all you feel is anger and confusion. For Kyle, life is a series of misunderstandings and hard fought conclusions. Everything that he knows is turning into a knot of headaches wound so tightly they threaten to explode at any given moment.

His mother and father are in the middle of a divorce while dating other people. Kyle has to deal with the fact that the man that his mother brings home, Reece, etches a red mark in his body so hot the poor child gives off steam. Meanwhile, Reece has a son named Ty, who Kyle has grown at least friendly with. One day after Kyle has helped Ty with his helplessly tragic basketball game, Ty’s friend Dwight rides up in a silver Corvette, looks Kyle up and down with a look of what Kyle interprets as disgust and things begin to spin a little bit out of control for him.

On the other side of the divorce, Kyle’s father has started dating the proverbial “other woman”, a bright – literally, she’s got sunshine coming out of her ears – and sympathetic Stephanie. Kyle finds a kindred spirit in her, someone he can talk to when things pile up in his mind. His companionship with the young woman, however, doesn’t curb his emotions. In fact, a sudden onslaught of relationships forced in Kyle’s lap is the catalyst to a series of events that lead him have to grow up and fast.

Gant’s debut effort is definitely a bold step for someone’s first foray into young adult fiction, especially when his protagonist is a sophomore, attending a Catholic high school, attempting to deal with his hormones and, oh yes, living his life as an out gay male in a pretty conservative environment. The story is compelling and, in fact, is an almost accurate portrayal of the erratic nature of a teenager growing into his own skin.

What takes away from the overall appeal of the story, however, is the jumble of events that come hot and heavy in this young man’s life. In seemingly one month, Kyle has to deal with conflicting feelings for his mother’s boyfriend, the increasing rapaciousness of his libido, the messiness of dealing with his father’s infidelity, and the spite and pain of high school. We get a hodge-podge of events that lead to an abrupt and intense climax that finds our lead character in more trouble than he knows what to do with.

In the midst of that we’re introduced to a couple side characters – Kyle’s friends Chain and Jill — whose stories are touched upon to paint a picture of the societal microcosm of high school, but are so melodramatic at times, it’s hard to take them in and accept them along with the tumultuous nature of Kyle’s life.

While the story itself is enthralling throughout, the ending was a let down, a hasty wrap-up ending the final chapter and an epilogue that serves to want to provide a hopeful happily ever after, but only ends up feeling like a sloppily tied bow.

Despite some glaring faults, The Thunder In His Head is a daring debut and surely a precursor to some beautiful young adult fiction to come for Gene Gant.

You can buy this book at Amazon.