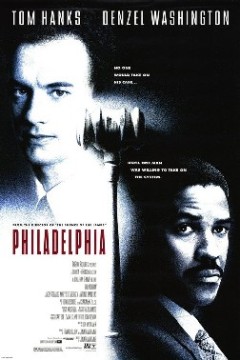 In a time when homosexuality was still very much taboo, Jonathan Demme dared give what many dubbed in the late 80s/early 90s as the “gay plague” very careful consideration, and by extension highlight the element most neglected therein — the human element.

Philadelphia is a study in touch, a visceral and in-depth look into how we as different extensions of humanity perceive skin on skin contact. We follow Andrew Becket (Hanks), an auspicious lawyer at one of the most reputable law firms in the city of brotherly love. He’s (seemingly) mysteriously fired from his job, his credibility and temperament put under attack by the very old money brotherhood that lauded him as one of the most promising litigators in the city.

Enter Joe Miller (Washington), a self-proclaimed lawyer for the people whose reputation as one of the most uncompromising in the business precedes him. So much so, Becket finds himself in Miller’s office, ready to sue his former associates for firing him on grounds of sexual orientation discrimination. The two lawyers, being peers and friendly rivals, strike up an instant rapport as soon as Becket walks through the door. Miller asks, “Hey, what’s that on your forehead?” Becket’s response, “I have AIDS.”

From that very moment, you can sense the shift in atmosphere, watch as darkness clouds Miller’s brow. Here he is, a man’s man of the 90s, Black and with a great deal of power. He has a loving wife, a gorgeous new baby daughter, and he’s just shaken the hand of man who’s been diagnosed with AIDS. Imagine being in his place, someone with very conservative views of sexuality and gender roles. Now imagine coming in contact with something rumored to kill on contact — try to stop your world from tilting off its very axis.

Barring his set of principles and prejudices, Miller understands what this case means on a fundamental level and what it could mean for human rights. He understands the anger of being outcast and judged based on something as superficial as skin color. When he finds Becket in the law library, readying his case to defend himself in court, he sighs and opens himself up to the prospect of fighting for the basic human rights of someone far removed from his world.

As a film, the message is very loud, bordering on preaching to its audience. However, what separates this film from milieu others at the height of the AIDS epidemic in the early to mid-90s is the delicate care with which Demme handles the subject matter. It helps that his cast was almost perfect, with Hanks delivering one of his best dramatic performances to date. But the atmosphere that Demme manages to create, utilizing the harsh perspective of acute camera angles, the boding of heavy music, and the blistering emotion of different shades of lighting, is absolutely breathtaking.

What Demme creates is a film that is as much about tone as it is about message. He takes subject matter that’s just begging to be blown out of proportion with undue histrionics and instead moulds it into something absolutely human. Philadelphia is a triumph of cinema, going for depth and stark rawness as opposed to grandiose displays of dramaticism.

The purity in this film can be summed up with the very haunting scene in which Becket is listening to opera, imploring Miller to taste the anguish, love, and absolutely raw humanity in the soprano’s voice. The air is thick with tension, the room spinning and off-kilter. And yet, there is light, beauty, and honesty in this very moment — the moment that breaks the boundary between us and those we fear. What is left is absolute warm touch.