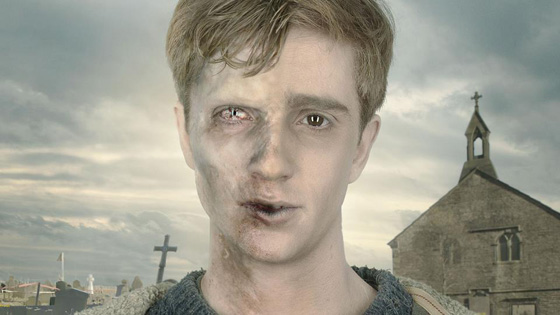 “I am a Partially Deceased Syndrome Sufferer, and what I did in my untreated state is not my fault.”

There is hope for loved ones suffering Partially Deceased Syndrome. With careful administration of drugs and therapy, those who used to mindlessly roam the streets and attack the living can now regain control of their minds and return to their families.

When Kieren Walker (Luke Newberry) returns to his family home, it is in secret. They live in the fictional Northern town of Roarton, the first place known to fight back against the waves of violent living dead. His sister Jem (Harriet Cains), who had fiercely fought against the living dead since the 2009 Rising, is disgusted with his very presence. Religious and military concerns, as well as pre-Rising tensions with others in the community, will further complicate Kieran’s life after death.

Despite some predictable moments and sudden spikes of melodrama, In the Flesh is a thoughtful program, sensitive to real-life interactions and themes. Through the post-zombie apocalypse trope, the show echoes issues like trauma and homophobia, as well as how people treat returning veterans and the mentally ill. The acronym PDS, for instance, reminds one of the usage of AIDS, especially when one character learns that PDS can’t be transmitted through bites. Viewers who don’t need elements explicitly stated can also appreciate the show’s handling of gay zombie romance.

Series lead Luke Newberry is a revelation with his quiet, astonishing performance. The rest of the cast, especially the youth, are also solid, which is important for a show so dependent on community and family dynamics. They enact a convincing depiction of a modern culture of fear, in which people must learn to confront lingering emotions instead of simply reacting with violence. Yet how far can one push people towards that confrontation? Can hope and truth sometimes be at odds? These questions underlie all that occurs in the first series of In the Flesh.

As Mirella reported, a second series has been commissioned. Americans can catch the first series on June 6th on BBC America.