Most of the time, China is a BIG mystery to me. Especially when it comes to modern China and where things are going in terms of LGBT rights… until I ended up finding this website called Queer Comrades.

I spent some time poking around their website and learning about the people that are actually there. I’ve been doing this for at least a year, so when I was planning on running this year’s LGBT Blogathon, I knew I had to get in contact with them and have them participate.

Little did I know that their producer, Stijn Deklerck, had so many interesting things to say about the process of running Queer Comrades from within China~~~ so I’ll just let him say all that he has to say. 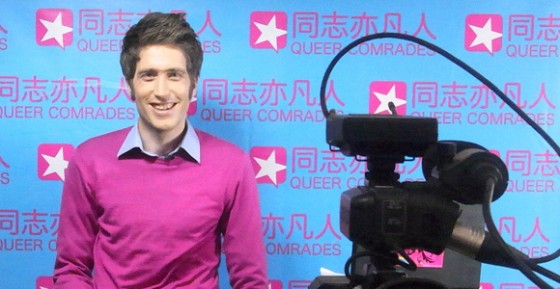 First of all, I want to start off with questions about you. How does a guy like you (are you Belgian?) end up in China?

Yes, I am Belgian. I first came to China in 2000. I had just finished my Masters of Law in Belgium. I specialized in Legal Anthropology, and I didn’t really know what I wanted to do. I just knew that I wanted to travel and discover something more of the world. I applied for a scholarship to learn Chinese in Beijing, I got it, and I came to China without knowing one word of Chinese, loving the whole experience.

I’m jealous. I’m in the process of learning Chinese… just now. How did you get involved with Queer Comrades?

I came out as a gay man before coming to China, in 1999, but I hadn’t really ventured that much into the gay world in Belgium. China was kind of the beginning of my ‘gay life’, which was quite ironic, as China only scrapped homosexuality from the official list of mental disorders in 2001. But anyway, I got to know a couple of gay people and we went out a lot.

At that time, the gay scene in Beijing was still very small. Everybody kind of knew everybody. For me, it was a great experience, and it was also how I really started to engage with Chinese people. I found that at university, it was pretty tough to really get to know the Chinese students. I had quite some Chinese ‘language-partners’ and people I hung out with, but I always felt a gaping distance. It was very much like, “You’re the foreigner and I’m Chinese and you will never understand where I come from.”

In the gay crowd, there was a very different vibe: homosexuality made that we all formed part of this minority, and it gave a sense of unity which wiped out most of the perceived “foreigners-Chinese” dichotomies.

During the next four years, I combined studies in Chinese law at different universities with ethnological research into the human rights ideas living within different Chinese NGOs. For my research, I volunteered in different Beijing NGOs. I was working mainly in the field of HIV/AIDS, but was also making explorations into NGOs working on LGBT issues.

In 2005, I produced the film Living +, an educational film based on the lives of people living with HIV/AIDS that I met in Beijing — a first in China, the film was made with the input of both HIV+ and HIV- actors. It was a great and eye-opening experience for me. I had always been kind of used to academic writing and reading, and working with film showed me a whole new and different way to express ideas/to capture the life & thoughts of people.