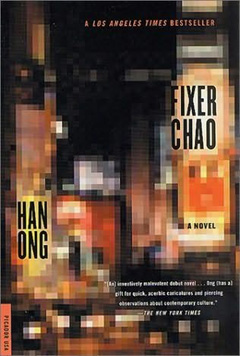 The United States entering the 21st century has formed a tumbleweed of affiliations and prejudices too prickly to untangle. In a dank New York City gay bar we meet William Narciso Paulinha, willing to do anything for twenty bucks.

Along comes Shem, a disgraced man who needs a particular Asian face for a scheme to humiliate his ex-wife and her social circle. The plan is so hilariously ingenious that it’s best to find out its nature within the book. What I will tell you is that William finds himself masquerading as the wise Master Chao.

There is little that escapes William’s street-sharpened ire. He appreciates and hates New York City, rages against blind faith, and bristles against the compound disadvantages of being a broke Southeast Asian gay man who doesn’t fit preconceptions of any category. Countering that is his positive zeal for knowledge and self-improvement, with an everyman’s allotment of common sense and compassion.

Han Ong, writing through William’s eyes, can expound about many subjects without trying the reader’s patience. This narrator is subtly blind to some of his own faults, such as when his bitterness overcomes his sense, or when he spouts ill-formed assumptions about matters such as the speaking of French amongst Belgians.

Ong, a playwright, crafts dialogue and narration with consideration of the meter of speech and thought. He’s fashioned a great story, balancing systematic social dissection with humor and honesty. It’s brilliant how he times the appearance of certain details. Although one might not share William’s dissatisfaction with everything, one can see the humanity in all aspects of the novel’s world — even when the protagonist refuses to see it himself.

All the characters may be fakes, but they also share a very relatable American pursuit: the discovery and betterment of self.