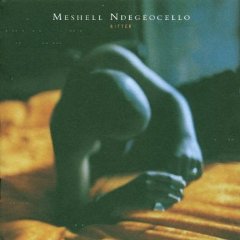 And this is where it all started for me. Meshell Ndegeocello is a walking power struggle. She struggles to maintain the control of her façade while battling with the overwhelming power that her penchant for loving hard has over her. This album is a testament to the layers of heartbreak, the title of the album itself informing where her heart is.

Bitter takes away your very breath, making every sigh that escapes your body a dagger ripping through your core. The album opens up with a requiem, of sorts. Adam is a funeral march, a procession that is full of heavy boding and heartbreak, leading into the harsh note of emptiness that opens the mourning cry of Fool of Me. The song is a steady beat, a slowly breaking heart that builds until it crumbles at your feet with lines like, “I’ve allowed you to make me feel… I feel so dumb. What kind of fool am I?”

The album continues its slow trudge into the deepest darkness of Ndegeocello’s mood, with songs Faithful and title track Bitter piercing with lyrics that are so sharp, you don’t realize you’ve been cut until the dull ache of a splintered heart throbs within you.

Then a light as pure as a sliver of sun after a rainstorm creeps through. Ndegeocello awakens with a new lover in her arms, or at the very least has found the splintered pieces of herself and put them together in such a way that she can finally see the beauty of the world. And herein lay the beauty of this album. While the first half seems drenched in darkness, the introspection of the second half is intelligent, the process intricate. Songs like May This Be Love and Sincerity are honest and raw, but songs Loyalty and Beautiful are almost begging lilts of a woman trying to find something real to hold on to.

Bitter closes on a note that’s as much hope as it is cerebral revelation. Adam’s counterpart Eve is a return to innocence, newness of earth and life. Wasted Time, while still in the throes of misguided pain, is an understanding that love is sometimes one-sided and unrequited. In the end, Ndegeocello finds new love, love that brings her from the darkness and gives her the soft light of hope in song Grace.

While some may dismiss the album as a jilted lover’s attempt to get herself back together, they’d be missing the most enchanting part. This is an album, yes, about pain, but also about growth. It’s a mature album that combines insightful and poignant lyrics with grand musicianship and nuance. This is truly an album to start the healing process. Lovers, be comforted.