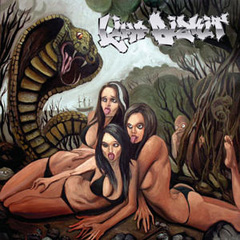 We decided we were more disgusted and bored with the state of heavy popular music than we were with each other. Regardless of where our separate paths have taken us, we recognize there is a powerful and unique energy with this particular group of people we have not found anywhere else. This is why Limp Bizkit is back.

Limp Bizkit is back — Wes Borland included — and on their sixth studio album Gold Cobra, they’re acting like it’s still 1999, despite how music has changed over the years.

For anyone expecting a great album out of Fred Durst’s band, Gold Cobra is not on the same level as Significant Other. The sound of the band [read: everyone but Durst] is great, but vocally it is weak, for the most part. Sure, Fred Durst has always been about not giving a fuck about what you think of him and the band, but songs like Bring It Back, Gold Cobra and Shark Attack — which sounds like the bastard child of Break Stuff (Significant Other) and My Generation (Chocolate Starfish and the Hot Dog Flavored Water) — makes me feel embarassed to hear them thanks to Durst’s rapping and lyrics.

The first song I listened to was Shotgun and I felt skepticism for the rest of the album, which didn’t suck as I thought it would. The song is still growing on me as I write this review and it might be one of the best tracks from Gold Cobra along with Walking Away and Loser, despite the silly lyrics and it making Durst a strong candidate for NRA Man of the Year. The second half of the album sounds much better (sans Autotunage), but it’s not exactly amazing by any means.

Limp Bizkit had a big chance with their long awaited comeback album to silence their critics and reignite a spark in former Bizkit fans that have moved on. Instead, Fred Durst played it safe with the selection of songs and the album will most likely appeal to diehard Bizkit fans, but not to other people at all. If you hated the band or Durst before, you’ll hate them again. As I said before, the sound from the musicians works very well — Wes Borland being the best Limp Bizkit offers. But Gold Cobra suffers from the lyrics from most of the songs and a 40-year-old man rapping/whining and sounding comically aggresive for the most part of the album.

At any rate, the best thing this album will spawn could be the band touring around because their concerts seem fun to attend.

Best tracks: Walking Away and Loser.