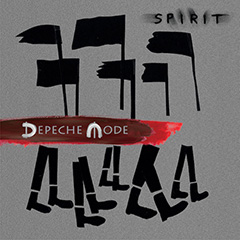 Depeche Mode has found somewhat of a comfort zone for its last two or three albums. Away from the raw and sounds of Ultra, or a kind of throwback to Playing the Angel, Spirit feels like a nice and easy ride through a complicated topic like apathy for the times we’re living in, but that’s not necessarily a good description for a political manifesto like they presented it.

The opening song, Going Backwards [1], has that western vibe which suits them very good and manages to create a good atmosphere for what is about to come (and never really comes). You can get exactly what they were trying to say during the promotions before the launching of the album, “we’re going backwards, to a caveman mentality.” That’s us right now.

Where’s the Revolution is what they think of us, millennials, not doing anything to change the course of history, in which we’ve been reduced to mere spectators. The chorus says it all, “Where’s the revolution! Come on, people you’re letting me down”, that’s the punkest song in the album. Once you listen to it, it’ll get stuck on your head for weeks to come. And that’s the whole revolution. The rest is business as usual.

There’s also the sexual You Move [1], which resembles Soothe my Soul [MV] from Delta Machine, the previous album. Yeah, that happens a lot, you’ll find several similarities with previous works. There are great tunes like Scum or No More (This Is the Last Time), but those are away from the original concept presented to us at the beginning.

Don’t get me wrong, this is a good album, with a good sound to it, but feels made by a band which has done it all and they’ve found their niche on the music market. Fans like me will follow them no matter what and that’s ok, because they haven’t disappointed, but I can only wonder what would have happened if they had gone for the full revolution, instead of just sharing a post on Facebook about what’s wrong with the world today.