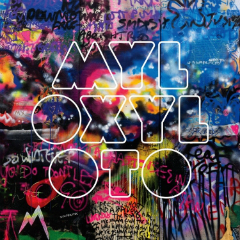 Paint yourself a picture: thousands of celebrity look-a-likes dressed in their nightclub best, ecstatic chatter from lips of every Botoxed shape and color coalescing into one giant roar. A short black Gucci dress here, a short black Cavalli dress there, and mountains of MAC products caked on the faces of a the nu-girl power generation.

There’s maybe hundreds of low v-necks, mimicking the “Guido couture” of the Viva Italia-rat pack: Ronnie, Vinny, Pauly D and The Situation. There’s a sense of vibrant tranquility, and once the strobe lights start dancing, the rockstar DJ emerges from the floor. The crowd bursts into joyous ululation with claps and cheers – it’s like Madonna has just entered the room. Every Teardrop is a Waterfall opens up in the night air…

Okay, the clubby description might be a little much, but this is pretty much the line Mylo Xyloto dances on; most of the upbeat tracks would easily fit into a DJ’s disco set. It’s Ibiza-laced electro rock, polished and grandiose, but danceable and frankly, quite huge. The perky good morning sound of Hurts Like Heaven is like a jumpier version of Viva La Vida’s Strawberry Swing. Paradise boasts an anthemic, shouty chorus of “paaaa-raaaa-paaaa-raaaa-paradise!” atop stompy electrobeats, while Rihanna proves she can sing any genre and sound delightful. It’s quite jarring to hear little miss RiRi confidently tramp through Princess of China’s hook-friendly Asia-influenced ambience.

Of course, it wouldn’t be a Coldplay album if Chris Martin didn’t bring things to a quieter, contemplative level. The hushed U.F.O. is short and simple (clocking in at two minutes for the actual song), the acoustic guitar and strings rounding out a good audio sound – chuck a harmonica in there and it’s a John Mayer track with an English vocalist. Spacey kick drum and piano lead the production for the heartbreaking Up in Flames, which really could have been a b-side on Kanye West’s 808’s & Heartbreaks.

Mylo Xyloto gives some really good sonic balance – it’s not too U2 and not too sad-Coldplay. The Edge influence is there, with the generous use of echoing electric guitars and layering – it’s unmistakeable for almost all songs, but the electronic-dance sound is nu-Coldplay at its experimental base. Even the slower tracks have some type of atmospheric engineering. Should be quite welcoming to the ears of the masses.