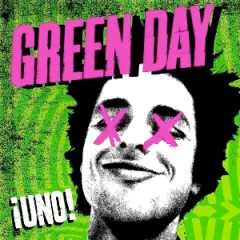 After reinventing themselves through their post-9/11 USA, political-themed, storyline-driven Rock Opera albums American Idiot and 21st Century Breakdown, you had to wonder what the hell Green Day could come up with next. Instead of following the format of their last two albums, Green Day decides to launch a trilogy of albums of different sounds to prove that they still have it in themselves. ¡Uno! — Green Day’s ninth studio album and the first from the ¡Uno! ¡Dos! ¡Tré! trilogy — features the band with a sound that borders mostly on the power pop and punk spectrum.

¡Uno! doesn’t follow the story lines of St. Jimmy (American Idiot), Christian and Gloria (21st Century Breakdown). However, the likes of Nuclear Family — a good choice to open the album — and Carpe Diem could have easily fit on those albums given their lyrical content. Rusty James stands out strongly because it talks about the current punk scene, their peers who labeled them as “sell-outs”, and it works well as a way for Green Day to say they’re still alive after 25 years.

“This broken scene is turning green
Brass knuckles left in the rain
Death wish kids among the living
I wanna ride on a divided,
Anything but the mainstream.
Where the fuck is “you’re OK, man”?

And all the losers can’t even win for losing.
And the beginners don’t even know what song they’re singing!

When there’s no-one left around and you’re the last gang in town.
And your heart can’t even break when it doesn’t even pound!”

While Loss of Control and Sweet 16 tackle the high school life, Kill the DJ is their first attempt at dance-punk that has some energy to it, but it doesn’t sound as great (or smooth) as The Clash’s Rock The Casbah [MV] or Franz Ferdinand’s Take Me Out [MV]. For a song whose chorus hates on DJs, the lyrics are all over the place.

¡Uno! also features some love songs, but not all of them work well because their lyrical composition comes across as cheesy [see: Fell For You, Troublemaker, Oh Love] for the most part — I really wished that Oh Love was placed at midpoint instead of closing the album. The exception to a love song that doesn’t sound cheesy can be heard on Sweet 16, which sounds relaxed and honest thanks to Bille Joe Armstrong’s vocals.

The real gem ¡Uno! is Let Yourself Go, which masterfully recaptures the old Green Day sound that older fans would love to hear again — the live version sounds even better — while simultaneously targeting complainers in general as well as their critics and fans — “You always seem to be stepping in shit, and all you really do is complain. Hitch a ride, tell ’em all you like…” — that love the pre-American Idiot sound and hate anything they do today. It’s the most energetic and fun Green Day has sounded in years, and songs like this makes me glad that they’re still around.

Overall, ¡Uno! is neither great nor awful. It has some great songs along with others that shouldn’t have made it to the album, but Let Yourself Go will definitely stand the test of time. At any rate, let’s hope the trilogy improves with ¡Dos! and climaxes strongly with ¡Tré! next year.

Preview on Xiami | Like it? Buy the album on Amazon or iTunes