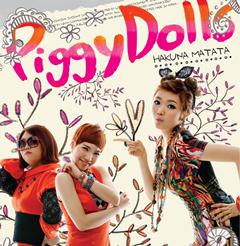 The Piggy Dolls have returned, releasing their first full-length album. Leaving aside weight and concept issues, Piggy Dolls is a great group. Their vocals put them miles ahead of their competition in today’s idol world. The first single off the album That Girl I Know is a soulful pop track that can easily get stuck in a person’s head (just ask me, it was in my head for days).

LUV Game is also just as upbeat and perky as the first track. I have to say that, for me, perky and bubble gum style pop usually loses it’s charm quickly. I like very few girl idol groups, and I generally don’t care for the sugary-sweet high pitched voices and silly sound effects often given to female groups. But, the Piggy Dolls have such strong, mature singing voices that they help balance out the cute factor really well.

We get to hear those beautiful, mature voices at their best in Yesterday, a lovely ballad, which oddly enough, I wish they would do more of. Their voices are now their selling point, so I think they need to work with songs that put that in the spotlight more than being “cute”. Hakuna Matata is the title track, and it’s a fun, up-beat track that sticks in my head just as much as the first track on the album. The final new track on the album, Shout, is a little reminiscent of After School’s Bang! with the drum beat on the back track, but the way the girls sing in the song is over the top for me and I tend to skip the track. The rest of the album is filled with their previous mini-album’s tracks, with no new changes to them.

In all, it’s a strong first album, but there is a definite change in style from the first songs they released and the new ones for this album. The first mini-album was very vocally strong and it put their voices first. Hakuna Matata felt more like it was directed towards a younger fan base and relied heavily on the girls’ “aegyo” factor.